Ever since the two met, Ritika has been a pillar of strength to the India batsman Rohit Sharma.

The wedding season just got spicier for Indian cricket as the star cricketer Rohit Sharma became the latest to tie the knot this year. After his team-mates Suresh Raina and Harbhajan Singh, Rohit became the latest cricketer to get hitched in 2015 when he married his long-time girlfriend Ritika Sajdeh in a grand ceremony in Mumbai on December 13. Read: In Pictures: Rohit Sharma gets married to Ritika Sajdeh

Rohit, who is quite bold when it comes to stroke-making, is extremely shy off the field. So it took him some effort to woo Ritika, an out-and-out Cuffe Parade girl. Ever since the two met, Ritika has been a pillar of strength to the India batsman. Let’s check a few little-known things about Ritika:

1. Ritika joined Cornerstone in the year 2007. This laid the stepping stone for her first meeting with Rohit. At present, she works with the same organisation as a sports manager.

2. Ritika first met Rohit in the year 2008 at a Reebok shoot and it was Yuvraj Singh who introduced them.

4. She is always present at all the matches Rohit is playing, even if they are domestic ones, which usually boast of empty stands. She gets nervous while watching him bat and keeps her middle and ring finger crossed for good luck. But she still prefers to watch Rohit bat live at the stadium than on the TV.

6. Ritika is an animal lover and often shares pictures on the social media space. It’s same with Rohit and he is associated with PETA India. Here’s some of recent posts.

7. “Best moment of her life”: This happened during the IPL earlier this year. In an interview with Times of India, she recalled, “He [Rohit] was at an event for Mumbai Indians and he came back and said, let’s go for a drive, which is totally normal and we do that all the time. We started driving and we were talking the whole time so I didn’t really think about where we were going. When we reached the place, he closed my eyes and got me to the cement pitch where he first played and proposed. It was the best moment of my life so far and the sweetest, cutest and the most personal proposal.” Read: Rohit Sharma gets engaged to his girlfriend of six years, Ritika Sajdeh

My happily ever after 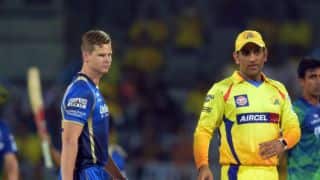 MS Dhoni, Ajinkya Rahane, Brendon McCullum among others expected to be hot bids at IPL 2016 draft