Romesh Kaluwitharana is a former wicketkeeper-batsman who represented Sri Lanka in the 1990s and the early 2000s.

Romesh Kaluwitharana, born on November 24, 1969, was a wicketkeeper-batsman who represented Sri Lanka in the 1990s and the early 2000s. He played 49 Tests, 189 One-Day Internationals (ODIs) and is best remembered for his destructive opening partnerships with Sanath Jayasuriya. Nishad Pai Vaidya picks 10 facts about the former Sri Lankan stumper turned coach.

1. Tough beginning: Kaluwitharana lost his father at the age of five and was raised by his mother. He told Asian Cricket Council’s (ACC) official website, “My father passed away when I was just five, unfortunately and my mother let me play sports to make up for that loss, I think.”

2. Hailing from Duleep Mendis’ alma mater: Kaluwitharana studied at St Sebastian College in Moratuwa. Duleep Mendis, one of Sri Lanka’s earlier cricket stars is an alumni of that school.

3. Looking up to Viv Richards: The pint-sized wicketkeeper-batsman looked up to the West Indian great Viv Richards since his young days. In an interview with Ten Cricket, Kaluwitharana said, “I used to love West Indies very much. I used to love Vivian Richards. He was my legend at the time. I used to watch a lot of cricket, read about him. But, unfortunately, I could not be another Richards. He was just brilliant.”

4. Representing Sri Lanka Young Cricketers at the McDonald’s Bicentennial Youth World Cup 1988: The McDonald’s Bicentennial Youth World Cup 1988, played in Australia, was a precursor to the ICC under-19 World Cup. Kaluwitharana was a part of the Sri Lankan side for that tournament alongside Sanath Jayasuriya, Chandrika Hathurusingha and Sanjeeva Ranatunga. In 1987, he had played for Sri Lanka Young Cricketers against an England team that featured the likes of Nasser Hussain, Mike Atherton and Martin Bicknell.

6. Not so successful 1996 World Cup: Kaluwitharana is often attributed as one of the key components of Sri Lanka’s successful campaign at the 1996 World Cup. However, he had only scored 73 runs in six matches in the tournament. It was during the tour to Australia that preceded the World Cup, where he had made an impact by scoring three fifties in tri-series.

7. Scoring zero in an opening partnership of 70: In the Singer Cup final against Pakistan in 1996 at the Padang, Singapore, Sanath Jayasuriya smashed his way to the fastest fifty in ODIs off 17 balls. All along, Kaluwitharana remained quiet and was dismissed for a duck with the score on 70. By then Jayasuriya had raced his way to 66 runs and the remaining four runs had come off extras. Despite that rocking start, Sri Lanka failed to chase down a modest target of 216, and were bowled out for 172.

8. The bowler: Kaluwitharana has only four wickets in competitive cricket. One of his wickets is Dilruwan Perera, the Sri Lankan all-rounder. In an unofficial tour game against Victoria County on the tour to Australia in 2002-03, Kaluwitharana bowled 1.5 overs, conceded two runs and took three wickets. One of his victims was stumped by Kumar Sangakkara.

9. Ventures outside cricket: Kaluwitharana owns a hotel called “Kalu’s Hideaway.” It is located near the Uda Walawa National Park in Sri Lanka. He has also taken up other roles. He worked with an insurance company and also was with Sri Lanka Tourism.

10. Coaching: Kaluwitharana was a part of the Evaluate China programme under the ACC. In 2008, he was appointed the coach of Malaysia. Currently, he is coaching Sri Lanka A. 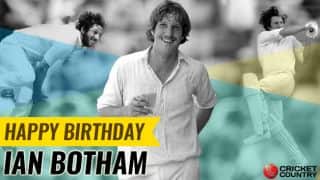