Speaking on a TV show ahead of the match, Gavaskar suggested that iconic cricketers Sachin Tendulkar and Sourav Ganguly could convince the Indian government to resume bilateral cricket ties with Pakistan

Nothing beats the excitement of an India-Pakistan clash, and when it is a World Cup match, the hysteria goes on a different level altogether. Whatever the political situation between the two countries may be, the fans from both the sides want more cricketing action between them. With all the eyes trained on Saturday’s ICC World T20 2016 clash between India and Pakistan at Kolkata, former Indian captain Sunil Gavaskar touched the issue of more matches between the two countries.

Speaking on an NDTV show ahead of the match, Gavaskar suggested that iconic cricketers Sachin Tendulkar and Sourav Ganguly could convince the Indian government to resume bilateral cricket ties with Pakistan. He said that Tendulkar being an MP was in the best position to convince the government’s stand on India-Pakistan cricket. Also Ganguly, who holds influential positions in the BCCI, could possibly help too in this regard, felt Gavaskar. “May be Sourav Ganguly can help too,” the former Test opener said, while reacting to a question if he could play a role in resumption of bilateral cricket between the arch-rivals.

India and Pakistan have not played a full series since the terror attacks in Mumbai in 2008. They did play a five-match limited overs series in India in 2012, but Test cricket between the two countries has not been played in a long while. In 2014, the two boards had signed an MOU to play six bilateral series between 2015 and 2023, but the BCCI in 2015 had to pull out of the proposed series after failing to get government’s nod. 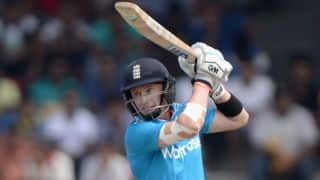