Shane Watson, born on June 17, 1981, is one of leading all-rounders in world cricket. Watson has been a success for Australia in all three formats, but is a master in one-day cricket.

Shane Watson, born on June 17, 1981, is one of leading all-rounders in world cricket. Watson has been a success for Australia in all three formats, but is a master in one-day cricket. His feats put him alongside the finest one-day all-rounders the world has seen. Nishad Pai Vaidya picks 10 facts about the Australian player.

1.  Starting off with Tasmania

Although Watson grew up in Queensland and played age-group cricket for them, he found his first call in domestic cricket with Tasmania. Watson had been a part of the Australian Cricket Academy, where Greg Shipperd, the renowned coach, recognised his talent. It was due to Shipperd that Watson got a contract with Tasmania and made his First-Class debut for them in 2001.He was only 19-years-old then. That move worked well for him as he was picked by Australia a year later for One-Day Internationals (ODIs).

In 2000, Watson played for Australia at the ICC Under-19 World Cup in Sri Lanka. That team was led by Michael Clarke and featured future internationals such as Shaun Marsh, Nathan Hauritz, Ed Cowan, Andrew McDonald and Mitchell Johnson to name a few.

Watson is known for being injury prone, particularly during his younger days. At the age of 21, he could have featured in the World Cup, but a back injury meant that he had to stay in Australia. Ian Harvey replaced him as Australia went on to win the World Cup. Although Watson remained a part of the Australian setup in the years to come, injuries often hampered his progress and it wasn’t until 2008 that he managed to find a more consistent run in the side.

Watson donned the Baggy Green during the Sydney Test of 2005 against Pakistan. The Pakistan openers had started decently well when Ricky Ponting introduced Watson into the attack. It was a slightly embarrassing beginning as Watson slipped and fell after delivering the ball.

When Australia toured England in 2005, they were put up at the famous Lumley Castle in Durham before a one-day game. Watson supposedly saw the ghost, Lily, which is said to haunt the fort. So scared was he that he spent the night in Brett Lee’s room, sleeping on the floor. Before going to Lee’s room, he spent time in the lobby. In a chat with The Australian, one of the staff of the hotel said, “Unfortunately, on that particular evening, with the Australians being in the hotel, we were full. He [Watson]chose to stay out of his room and, first of all, slept in the reception area because he wouldn’t go back to his room but then I think he got in touch with one of his teammates and he slept on the floor in his room and he point-blank refused to go back to his room.” The news spread like wildfire and in one of the games, England pacer Darren Gough raised his hands and said, “boo” as he stood close to Watson.

6.  Stomach pain mistaken for a heart-attack

In 2006, the Australian team were in Mohali during the ICC Champions Trophy. Ahead of a training session, his chest started hurting and he was taken to the hospital. He feared that it was a heart-attack, but fortunately, it was only gastritis. Watson recovered and played the rest of the tournament as Australia went on to win their maiden Champions Trophy.

Watson’s career was at crossroads in 2007-08 as injuries prevented him from pushing for a regular spot in the Australian team. Then came the first edition of the Indian Premier League (IPL) in 2008, where he was picked by the money ball team Rajasthan Royals for USD 125,000. In a tournament that saw Rajasthan win against all odds, Watson was their biggest success as he scored 472 runs at an average of 47.20 in 15 matches. To back that up, he also picked 17 wickets. He won the Man of the Tournament award. He was out of the Australian team for some time, but this performance made it difficult to ignore him. Matthew Hayden injured himself in the West Indies and Watson took his place in the one-day side, where he marked a successful comeback. Had he not been recalled, Watson would have been in the Maldives for a vacation.

Watson has stayed with the Rajasthan Royals since the first season. Upon retention, a player gets a substantial fee and Watson has benefited tremendously. According to Australia’s Business Review Weekly, Watson was Australia’s highest paid cricketer in the year 2014. He has consistently been one of their top earners and is also one of the highest paid non-Indian cricketers.

It is fair to say that Watson is one of the best players in one-day cricket in recent times. He is the only man to win the Player of the Tournament in the IPL and the World T20. Watson also has two 150-plus scores in successful run-chases in ODIs, a feat only managed by Sanath Jayasuriya. During his innings of 185 not out against Bangladesh, which is also the highest score by an Australian in ODIs, he smashed 16 sixes, which was a record at the time. During the ICC World T20 2012, he won the Player of the Tournament, where he was the top run-scorer with 249 runs in seven matches. He had also taken 11 wickets in the tournament and before Ajantha Mendis overtook him there, he was at the top in the batting and bowling lists.

10.  Homeworkgate and moving away from vice-captaincy

One of the infamous episodes in recent history has been the Homeworkgate issue. Watson, who was then the Australian vice-captain, was one of the four players who were dropped for the third Test against India in Mohali on account of not completing a task handed down by the team management. It seemed bizarre from the outside and Watson left the Australian team as his wife was to deliver their first child. However, he returned and led them in the fourth Test at Delhi, in the absence of Clarke. Watson then resigned from vice-captaincy later that year. There were also murmurs of a rift with skipper Clarke. As the drama did not die down after Mickey Arthur’s sacking, the former coach had famously claimed that Clarke had called Watson a ‘cancer’ in the Australian team. With success down the line, the issue was put to rest. Since then Australia have won the Ashes 5-0, a Test series in South Africa and then the ICC Cricket World Cup 2015. 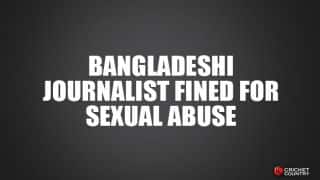 Moises Henriques released from hospital after collision with Surrey teammate