Australia’s charismatic opener Shane Watson, who is known for his clean hitting, has announced his retirement from international cricket.

Australia’s charismatic opener Shane Watson, who is known for his clean hitting, has announced his retirement from international cricket. Earlier, he quit from Test cricket at the end of last year’s Ashes. He will be bidding adieu to international cricketing circuit after the ongoing ICC World T20 2016 in India.

Watson hasn’t played any One-Day International (ODI) match since September 2015. As reported by cricket.com.au, following his international retirement, he also confirmed on quitting from First-Class cricket as well. When asked on his realisation for retirement, Watson said, “One morning I woke up in Dharamsala to the beautiful view and I don’t know what it was exactly but I knew now was the right time. I’ve really enjoyed my time being back in the Australian squad. But it is quite different, none of the other guys I played with growing up are here any more. I’ve made the right decision. I couldn’t really see the light with the all the injuries I had.”

He will leave the limited overs international cricket after playing 190 ODIs, in which he scored 5757 runs at 40.54 and took 168 wickets as well. He is yet to play few more matches in T20Is and who knows that his final send off will add some more achievement in his career. “Hopefully there’s still one highlight to come, with us really hitting our straps over the next two games. Then once you get to the semis you never know what will happen,” added Watson. 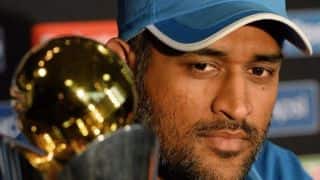