The selection disappointed many out of which one was Ravi Shastri, who was also the toughest contender for this role.

After a lot of fuss regarding India’s head coach the dust finally settled down with former Indian captain Anil Kumble being appointed for the elite job. The selection disappointed many out of which one was Ravi Shastri, who was also the toughest contender for this role. Also Read: Anil Kumble called up Ravi Shastri after his appointment of head coach

Interviews were conducted for the high-profile role and on this occasion Shastri reveals that Sourav Ganguly was not present in the selection meeting when he was interviewed. He told TheIndianExpress, “Ganguly wasn’t there when I was interviewed.”

Shastri was video linking from Bangkok while Laxman and Jagdale were present at the Taj Bengal hotel in Kolkata. Tendulkar, who was in London managed to get in through Skype whereas Ganguly during this course was in the office of the cricket association of Bengal (CAB) in Kolkata for a committee meeting. When Ganguly ended the meeting and walked out at 6.30 pm he told the media that Kumble, Pravin Amre, and Lalchand Rajput were interviewed in person while Shastri was spoken to on Skype. Several attempts to get in touch with former Indian skipper were in vain as he didn’t react to calls. Jagdale was also not accessible for any statement. 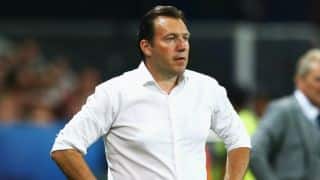