Having won the World Cup in 1996, Sri Lanka have been a successful ODI unit and over the past two decades they have produced some of the best cricketers in this format.

Sunday, August 28, 2016, saw Tillakaratne Dilshan playing his last One-Day International (ODI). Having made his debut way back in 1999, Dilshan was among the very few current cricketers who carried on playing since the previous century. Unfortunately, his last outing did not yield the desired results; the inventor of ‘dilscoop’ ended his career as one of the greatest ODI cricketers of all time. On this occasion, Suvajit Mustafi selects his all-time Sri Lanka ODI XI and Dilshan surely is one of the top picks.

Arguably, the greatest limited-overs cricketer of all-time, Sanath Jayasuriya has to be the first pick in any Sri Lanka all-time ODI XI. Adjectives are rare to describe the Matara Mauler’s madness. He is a man who redefined opening batting in ODIs and traumatised many ‘90s kids, especially the Indian fans (I belong to the victim gang too). Surprisingly, for a third of his career, he was considered a bowler who could bat.

Sanath and Dilshan at the top, can it get any better? Dilshan’s ‘dilscoop’ puzzled bowlers all around the world but he was much more than that.

Starting as a middle-order batsman who could keep wickets, field brilliantly and chip in with valuable off-spin, the watershed year in Dilshan’s career was in 2009, when he consistently batted at the top of the order. He registered 12 ODI hundreds after turning 35, the most by any batsman and by the time he finished, with over 10,000 runs and 100 wickets, he ended as a limited-overs great.

A modern day great and one of the best to grace this game, in a recent poll from Cricket Australia, Kumar Sangakkara was voted as the ‘greatest ODI player’ of all time. Sanga is in the league of Brian Lara and Ricky Ponting as a No. 3 batsman, and throughout his career, he remained one of the best wicketkeepers. Sanga became the first batsman to score four back-to-back centuries in ODIs and he achieved this feat in the ICC World Cup 2015, his last ODI tournament.

The holder of second most runs in ODIs, Sanga is good enough to walk into any World XI side, and as a wicketkeeper-batsman, his impact was no less than that of Adam Gilchrist and MS Dhoni.

Standing at 5 foot 3 and half inches, and plump, Aravinda de Silva does not look like a man who likes fast cars and score at a fast rate; however, he stands very tall when we measure his contributions to Sri Lankan cricket. He was an ornament to batting. The Man of the Match in World Cup 1996 semi-final and final, de Silva for long was Sri Lanka’s best batsman, especially during the time when they were mere competitors.

De Silva could attack at will and was extremely strong in the square of the wickets. He was one of the guiding forces that made Sri Lanka world-beaters. Not to forget, de Silva was a more than handy off-spinner.

The elegant and stylish Mahela Jayawardene comes in at No. 5. He may not have done justice to his immense talent at the ODI level but he had the nerves to perform in tough and demanding times. Be in the 2007 World Cup semi-final or 2011 World Cup final, it was Mahela’s brilliance that came to Sri Lanka’s rescue.

In times to come, Dinesh Chandimal will challenge him for this spot but with his immense experience and versatility, the technically near-perfect Jayawardene for now has sealed the position.

Muttiah Muralitharan was asked recently if Sangakkara contributed the most to Sri Lankan cricket. The spin wizard denied and was quick to name Arjuna Ranatunga. Yes, Arjuna was like the ‘big brother’ of the team. An astute and inspirational leader, his innovative captaincy set a trend in ODIs and helped Sri Lanka lift the World Cup in 1996. He left Sri Lankan cricket at a far better place than from when he took over the captaincy reins.

The potbelly and the plumpness never came in his way of rotating the scoreboard. He was an excellent manipulator of the field. Arjuna bats at No.6 and leads the side.

Angelo Mathews, the current Sri Lankan captain, is a modern day all-rounder that every team vies. A very good adaptive batsman across formats, an accurate bowler, brilliant fielder and a good leader of men, Mathews has done very well for Sri Lanka. With Dilshan, Mahela and Sanga retired, in years to come, Mathews’ will play the key role in Sri Lanka’s success.

Mathews will play the role of a finisher in this side and will contribute with his disciplined medium-pacers.

Warnakulasuriya Patabendige Ushantha Joseph Chaminda Vaas, yes his reputation in Sri Lankan cricket was as heavy as his full name. For over a decade, he single-handedly shouldered Sri Lanka’s bowling attack as their pace leader. Others came and went but Vaas continued to be the spearhead and a match-winner. His 8 for 19 against Zimbabwe is the best bowling figures in ODIs.

A skilful bowler, who could seam and swing, his strength was the well disguised off-cutter which made him dangerous in the limited-overs format. Down the order, Vaas could wield the willow effectively and has an ODI fifty to his name.

An unorthodox action, searing inswinging yorkers, deceptive bouncers and slower-balls, Lasith Malinga is your modern limited-overs fast bowler, who has climbed his way to legacy through his sheer brilliance.

At one point it did seem that Sri Lanka have found a match-winner post the Murali-era. Ajantha Mendis won his side many games but gradually faded away from top contention but in a short career, he has inflicted enough damage to make a cut in this side.

In days of mystery spin bowling, Mendis revived the art that saw the likes of Jack Iverson climb to success. Just like Iverson, Mendis’ fame was short-lived. However, he still features in Lanka’s current scheme of things. They will forever be indebted to him for taming the much-famed Indian batting line-up for a major part of 2008.

Last but not the least, here comes Sri Lanka’s biggest match-winner and a man who needs no introduction. Murali is cricket’s most successful bowler and sits comfortably at the top of the list for ODI bowlers. Murali has foxed the very best from his generation and along with Shane Warne, is considered the greatest spinner to have played the game.

Like in all the sides that he has played in, Murali is the most important player in this XI. Period. 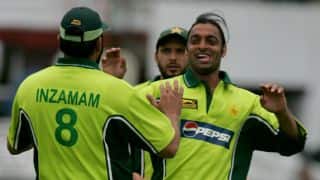 Shoaib Akhtar: Inzamam-ul-Haq, the most difficult batsman I have ever bowled to