Steve Smith in TV ad: It's ok to be vulnerable, I want to come back better than I was

Steve Smith in TV ad: It's ok to be vulnerable, I want to come back better than I was
By CricketCountry Staff

Disgraced former Australian captain Steve Smith journey back to international cricket, after copping a one-year ban for admitting to ball tampering, seems to be on track.

After getting a few hits out in Sydney in grade cricket, Smith appears in a new commercial for Vodafone, and no surprises for guessing what the theme of the ad is – redemption.

ALSO READ: CA bans on Smith, Warner and Bancroft to stand: What this means for the players

Smith s, whose ban ends in March next year, says in the ad that after what unfolded at Cape Town, he was in a pretty dark space with things falling around him.

“Everything I dreamed of, everything I was a part of was just falling to pieces,” Smith says. “I was in a pretty dark space. It was just about being upfront and honest and taking responsibility. I’ve certainly had some difficult days.

Smith though goes on to say that he will be back better than ever.

The ad titled Gutsy is Calling aired a day after Australia won their first Test after the sandpaper scandal, beating India at Perth under Tim Paine.

Smith last week led his club Sutherland to the New South Wales Premier T20 championship in his return to the Sydney Cricket Ground. His ban ends on March 29, 2019. 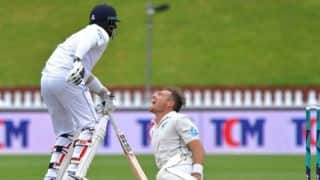