Raina, who usually bats at fourth position in the batting line up, wants a change in his position.

India’s middle-order batsman Suresh Raina will be making a comeback to the side in the upcoming three-match Twenty20 (T20) International series against Australia. India have already lost the One-Day International (ODI) series by 0-4 margin with one match to go. With the reinforcement coming up for the T20Is, the team will look to do well atleast in the shortest format.

Currently, India are facing problems in their batting department besides their poor bowling. Except for Rohit Sharma, Virat Kohli, Shikhar Dhawan and Ajinkya Rahane, no other batsman has taken the ownership and showed intent and hunger to play well. The new comers — Gurkeerat Singh Mann and Rishi Dhawan too haven’t done anything yet to impress. One should also not forget that the skipper MS Dhoni and Ravindra Jadeja, who have been a part of the team for a long time now, could also not do anything special with their willow.

Raina, who usually bats at fourth position in the batting line up, wants a change in his position. “It would be better if they (team management) can tell me at least 10 overs before (I got out to bat) about my batting position. It is important to know your strengths. It helps in formulating your own plans as well. If they can tell me before the game or during the game, it helps in planning the innings in a better way,” said Raina to MidDay.

Coming back to batting order, Raina admitted that he wants to bat at number three in the line-up and added, “I would love to bat at No 3. I have always batted at No 3 in the Indian Premier League (IPL). I am the highest run-getter in that position (471 in 15 international innings).”

Since Kohli has been batting at number three for a long time, Raina is ready to bat at number four and quipped, “It (batting position) depends on coaches and captains. I will have a word with the captain and coach once I reach there (Australia). I also don’t mind batting at No 4 since Virat Kohli is batting at No 3. But No 3 would be my preferred position.”

Learning from his previous experiences in Australia during the ICC World Cup 2015, Raina will be focusing more on running between the wickets rather than looking for big shots as the boundaries Down Under are big and not easy to clear. “Although T20 is all about playing big shots, I would look to run hard between the wickets in Australia where the grounds are much bigger. I will look to capitalise on twos and threes there,” said Raina. 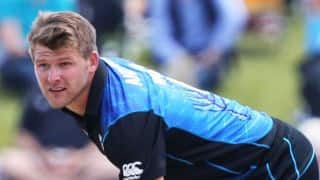 Sourav Ganguly finds Virat Kohli, not Sachin Tendulkar, the best touring player for India Down Under