The 14-man squad has some surprises as some big names have been left out from the squad.

The Indian squad for the Twenty20 International (T20I) series against West Indies in Florida has been named. The 14-man squad has some surprises as some big names have been left out from the squad. The team will be led by MS Dhoni and will lock horns with West Indies in the two-match series at the end of this month.

Suresh Raina has been dropped from the side, which may come as a surprise to many along with Yuvraj Singh. Raina was once tipped to be the best T20 batsman from India but his mere runs column for the national side has cost him his place. Both were part of the Indian T20 side for the recently concluded World T20. Indian off-spinner Harbhajan Singh too didn’t find a place in the squad.

Hardik Pandya, who was tipped to achieve greater heights in T20 cricket for India has also been dropped from the side. Consistent run in the Indian Premier League for KL Rahul has earned him a spot in the side.

Check out the whole squad here: 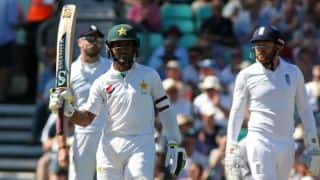