The Tendulkars have shared a very close bond with Harbhajan and Geeta in the past.

The most respected cricketing couple of Sachin and Anjali Tendulkar arrived in Jalandhar to attend the grand wedding of former colleague Harbhajan Singh and his long-time girlfriend Geeta Basra on Thursday. Today is also Yuvraj Singh’s mother’s birthday and the former would also be present at the wedding.

The Tendulkars have shared a very close bond with Harbhajan and Geeta in the past. Earlier this year, the two couples were even spotted having dinner at a posh suburban restaurant in Mumbai. So it’s no surprise that Tendulkar and Anjali took out some time from their schedule to attend the weeding. There was no news of Sachin and Anjali turning up but the power couple managed to keep their visit a low-key affair. But their presence will make the star-quotient seer.

India’s Test captain Virat Kohli is also expected to be present at the wedding along with cricketers like RP Singh, Parthiv Patel, Mandeep Singh, Rahul Sharma and others. It was the Board of Control for Cricket in India (BCCI) who took to Twitter to confirm Tendulkar’s arrival at the wedding by posting the picture which read:

We dearly wish Harbhajan all the best for his second innings. Read more about Harbhajan Singh’s wedding 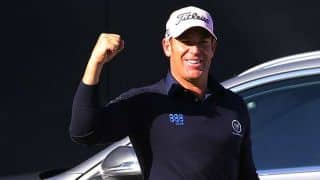