Social filmmaker and activist P Ullhas had lodged a complaint regarding the issue to Mohali police.

The issue over the use of tricolor on the helmet is not new to Indian cricket. In the past, Sachin Tendulkar has had to bear the brunt for the positioning of tricolor below the BCCI logo on his helmet. After getting a rap from the court of law, he repositioned it and kept using on his helmet. Interestingly, Tendulkar was the first player to start this practice which has since been followed by other Indian cricketers.

And now, all the cricketers, who adopted this practice after watching their idol Tendulkar, can land in trouble.  The Indian cricket team could be warned against having the tricolour on their helmets before the semi-final clash against West Indies at Wankhede Stadium on Thursday. The Mohali police had been alerted to ensure that the national flag is not disrespected during the match between India and Australia, a report in Deccan Chronicle stated.

Social filmmaker and activist P Ullhas had lodged a complaint regarding the issue to Mohali police. “It is illegal to paste tricolour on helmets. Our national pride is disrespected by that, it is shameful to note that the players are seen spitting on the ground where they also put their helmet (when not in use),” said Ullhas, who had brought the matter to skipper MS Dhoni’s notice through Twitter. While Dhoni stopped using the tricolour, others have not; hence he decided to take up the matter.

“I was directed by the Delhi High Court and the Home Ministry to inform the nearest police station where players violate the laws,” said Ullhas, who will come down to Mumbai for the semi-final and will inform Mumbai police about the issue. Interestingly, the same activist also drew the attention of Amitabh Bachchan for his incorrect pronunciation while singing the National Anthem before the commencement of the India-Pakistan match at Eden Gardens recently. 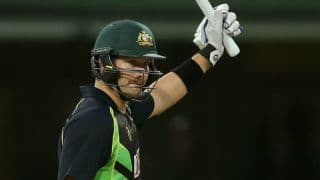