According to the police, the incident was brought to light when the caretaker of the single floor premises noticed that one LCD television was missing.

Chennai Super Kings captain Mahendra Singh Dhoni s house in Noida Sector 104 was attacked by thieves, who allegedly stole an LCD television in the wee hours of Sunday. According to a report in the Hindustan Times, the police informed that the has been rented to one Vikram Singh who is renovating it.

According to the police, the incident was brought to light when the caretaker of the single floor premises noticed that one LCD television was missing.

There were three packed LCD televisions in the house and one of them was on Sunday. Singh, who has taken the property on rent, informed us about the missing LCD television. They gave us the application and we have now registered an FIR in the matter, Prashant Kapil, station house officer, Sector 39 police station, was quoted as saying in the report. (VIDEO: Chennai Super Kings, Delhi Capitals square off in battle for top spot)

The theft occurred at the former India captain s house in Sector 104 which is usually a residential area. The case has nothing to do with Dhoni as the house was given on rent to Singh, Kapil said.

Singh had informed the police about the robbery on Monday, but no written complaint was given. The complaint was registered on Tuesday evening. (ALSO READ: MS Dhoni s been pretty sick, reveals Chennai Super Kings coach Stephen Fleming)

Singh told us that a helper has been missing since the theft has taken place. We are looking for him and soon he will be arrested. There was renovation work going on, so one of the people who were working there must have stolen the TV, the officer said. 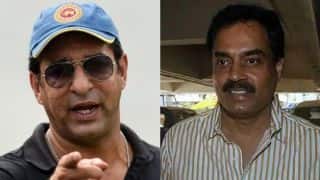 Vengsarkar, Akram back Euro T20 Slam, say it will give good exposure to players from Scotland, Ireland and Netherlands