Those were the best days of Ravi Shastri's life!

Those were the best days of Ravi Shastri's life!

An effective all-rounder, astute cricket brain, a popular commentator and till recently, the director of Indian cricket, it was the latter role that Ravi Shastri considers the "most cherished and memorable phase" of his life.

Ravi Shastri has enjoyed a lot of success with the Indian team. He was a part of the Indian squad that won the World Cup in 1983 and less than two years later; it was his heroics that saw India clinch the World Championship of Cricket in Australia. Shastri was named the Champion of Champion. A popular commentator and till recently, the director of Indian cricket, it was the latter role that he considers the “most cherished and memorable phase” of his life. READ MORE: 10 incredible stats and facts about the 1983 World Cup final in which India beat the West Indies

“I have no doubt in my mind that these are the best 18 months that I have spent during my association with Indian cricket as a player and then as a Team Director. It as been the most memorable phase of my life if I just look back at what we achieved as a team during this phase. Credit to the boys for making it special,” Shastri told PTI. READ: The flamboyant and extrovert Ravi Shastri speaks about his young days

Shastri did not answer if he will apply for the Head Coach’s position but spoke about his glory days in the 80s. “Yes, I have had success as a player. I fondly remember 1985 World Championship of Cricket, 1983 World Cup and proud of those but this phase as the Team Director was special. Look at some of the performances during this phase,” added Shastri. ALSO READ: India beat Pakistan to win the World Championship of Cricket

He reckoned that the ODI series win in England, the Australian whitewash in T20s earlier this year and the Test series wins against Sri Lanka and South Africa as the major highlights. India played some good cricket in the World Cups too. In World Cup 2015, they won all their games and lost to the eventual champions Australia in the semi-final. The same fate followed in World T20 2016, when they made it to the semi-final before losing to West Indies. 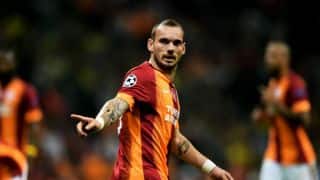 Wesley Sneijder to miss Netherlands' friendlies due to rib injury