Finally Ajinkya Rahane ends his bad phase with the bat, as he brings up his maiden Test hundred at home.

Finally Ajinkya Rahane ends his bad phase with the bat, as he brings up his maiden Test hundred at home in the last Test of the ongoing series between India and South Africa. Rahane, who had scored only 39 runs from four innings prior to this innings, made the difference for India at Feroz Shah Kotla in Delhi. He looked good and was taking the opposition bowlers with full of confidence.

He ended the first day with 89 runs and brought up the landmark in the first session. Rahane came at the crease when India was down for two wickets at the score of 66. From there, he kept scoring runs at a good pace with captain Virat Kohli. Further, India lost four quick wickets but cool and calm Rahane stayed at the crease crafting good partnerships with Ravindra Jadeja and then Ravichandran Ashwin. Twitterati congratulated Rahane for his heroic innings.

Poor 1st hour for Proteas. But at least Rahane showing major runs CAN be scored on this pitch. — Rob Houwing (@RobHouwing) December 4, 2015

Great watching Rahane . Century and then two sixes in an over ! — Abhilash (@The_Soberman) December 4, 2015

Other players silence critics by scoring abroad. Rahane does that by scoring in India. 1st ton at home after NZ, Australia, England, SL. — Trendulkar (@Trendulkar) December 4, 2015

The ghosts of the nightmarish Test debut at this very ground have been exorcised for good. Take a bow, Ajinkya Rahane. #IndvsSA — Shirin Sadikot (@ShirinSadikot) December 4, 2015 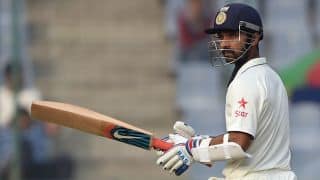