A prodigy that Utpal Chatterjee was, he should have played more international cricket than a mere 3 ODIs.

Utpal Chatterjee, born July 13, 1964, is the highest wicket-taker in the history of Bengal. A prodigy that he was, he should have played more international cricket than a mere 3 ODIs. Suvajit Mustafi peeks into his illustrious domestic career and digs out 15 things to know about the unfortunate left-arm orthodox bowler.

1. Childhood: The city of Kolkata enjoys an intense north vs south rivalry. Chatterjee was born in a Bengali Brahmin family, and grew up in North Calcutta. He attended Shyambazar AV School.

Even the likes of Dattu Phadkar, Madhav Apte, and Ramnath Kenny have played for this club. The great English batsman Herbert Sutcliffe once played against the club at their ground.

3. ‘David’: It is unusual for a young Bengali boy to earn a nickname like ‘David’. However, Chatterjee managed that. There is an interesting reason behind this. As a young boy, he bowled left-arm seam, and had modelled himself on Alan Davidson‘s action. His ribcage had an extra bone, thus it led to a back injury and he switched to spin. His bowling style changed but the nickname remained.

4. First-Class debut as an opening seam bowler: You have to be a rare talent when you make it to your state team for something else and make your name with a different art. Chatterjee made his First-Class debut, as a 20-year-old, in November 1984, as an opening bowler. Doshi was the lead spinner. Chatterjee finished with match figures of 15-4-38-1.

5. Role in Bengal’s Ranji Trophy win: Bengal won the Ranji Trophy in 1989-90. The final marked the First-Class debut of a teenage southpaw called Sourav Ganguly. This was the first time in 51 years that Bengal laid hands on the coveted Indian domestic trophy. In days, when teams looked for deliberate draws and feed off first innings lead, Chatterjee ended the season with 10 wickets at 30.30 and an exceptional economy rate of 2.09.

6. Honeymoon-run in Ranji Trophy: Chatterjee ruled the early 1990s with his lethal spin. Had Anil Kumble and Venkatapathy Raju not been around, an India Test cap would have been a surety. In 1992-93 his 42 wickets came at 14.76. The next season, he claimed 49 wickets at 16.55.

Representing India A in the SAARC Quadrangular Tournament, Chatterjee claimed 7 wickets at 15.85 and an economy rate of 3.06. He was exceptional against the visiting England A and they were days when the wickets of Sachin Tendulkar and Vinod Kambli were prize scalps. He got them both in a Challenger’s Trophy game later that season.

7. Tied up Tendulkar, Dravid and Ganguly but lost out to Raju: Just a month and half before the World Cup 1996, Chatterjee had done his bit to be picked for India Seniors ahead of Raju. The latter was in the India A side. In a match between the two sides, Chatterjee bowled exceptionally to get the wickets of Tendulkar and Rahul Dravid. He dried up the runs and even his state teammate Ganguly could not score freely off him. He finished with 10-0-25-2, but Raju bowled India A to a win, registering figures of 10-1-39-6. Though Chatterjee bowled very well in the tournament, Raju’s 11 wickets saw him earn the selector’s goodies.

9. International cricket: Making his debut in the Asia Cup 1995, against Bangladesh, Chatterjee claimed figures of 1 for 28 from 10 overs. He picked two wickets in his next game against Pakistan and was dropped from the next game. Seven months later, he played his 3rd ODI and unfortunately, he became a victim of Martin Crowe‘s assault. Figures of 8.5-0-54-0 saw the national doors bang on his face, forever.

10. Bengal Cricketer of the Year: He preferred staying away from prize ceremonies but was awarded with this prestigious title in 2000. His speech reflected his attitude towards the Cricket Association of Bengal (CAB). He told Rediff in an interview, It is always a good feeling to receive an award, especially when it is given to you in recognition of your performances on the field. But it also hurts me that the CAB didn t find any young players and had to name me for that award even at this age. This only goes on to show that young players do not have dedication towards their game.

11. Abrupt retirement: His relationship with CAB had soured and a rift with the administration forced him to call quits post 2003-04 season.

12. SOS call: Chatterjee’s retirement left a huge hole in the Bengal team and the following season, they were the verge of being relegated to the Plate Division. The CAB sent SOS to Chatterjee and then India captain Ganguly. Madhya Pradesh had started well; Chatterjee dismissed the young Naman Ojha to bring up his 500th First-Class cricket. His 3 for 81 restricted MP to 392. Ganguly contributed with 121 and Bengal managed a five-run lead to avoid relegation.

13. Impeccable record: Chatterjee finished with 504 First-Class wickets at 24.90 and 161 List A wickets at 23.51. He played majorly in the 90s when limited-overs cricket saw resurgence. He still managed to finish with an economy rate of 3.92. He also has a First-Class hundred to his name.

14. Chatterjee is employed to United Bank of India in Kolkata.

15. Coach: Chatterjee was appointed Bengal coach in 2008. Later, the side got relegated and he was replaced. He now runs a spin academy in Kolkata. Neymar: I was overwhelmed by Lionel Messi and other Barcelona icons 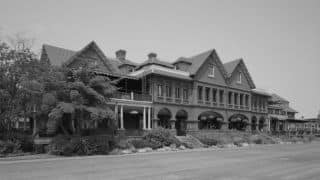