India’s star batsman Virat Kohli has been one of the  most consistent batsman in current international cricket. He was the key player in ICC World T20 2014, in which India lost in the final against Sri Lanka. He was the best player for India throughout that tournament and played a scintillating knock in the semi-final against South Africa when he scored 78.

Since he made his debut in Indian side, Kohli has been one of the most important player for the Indian side and never looked back since then. With the start of ICC World T20 2016, Kohli picks his six best fantasy players for T20Is. The list has Chris Gayle, Shane Watson, AB de Villiers, Ravichandran Ashwin, MS Dhoni and Lasith Malinga. Hear it from Kohli:

.@imVkohli picks his Fantasy League #Super6 for #WT20! Can you pick a better one? https://t.co/Ht3fW1FJLThttps://t.co/w6ePdEKY8k 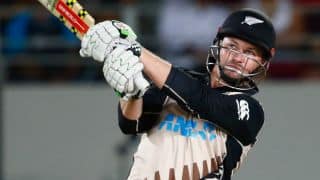