Nehra has been in sensational form in the recent times and has led the Indian bowling attack with immense confidence.

AGE B. AVG, STRIKE RATE, HS, the evolving game of cricket demands overall abilities from cricketers; hence, a bowler in contemporary cricket too needs to know the basics of batting. Unlike old golden days where a bowler’s primary job was only to put in the hard yards no more exists. The present day cricket has got tougher and demands a good skill set from every cricketer.

India will lock horns with Bangladesh in the Asia Cup 2016 Final at Mirpur in Sunday and it seems India is leaving no stones unturned in their preparation. In a video posted by Board of Control for Cricket in India (BCCI) on Twitter, Indian bowler Ashish Nehra was seen working on his batting in the nets. They also wrote, “Looks who’s honing his batting skills at the nets. It’s Ashish Nehra receiving throwdowns first #AsiaCup”

Nehra has been in sensational form in the recent times and has led the Indian bowling attack with immense confidence. He’s been the key and will certainly be the man to watch out for in the finals. Unless Bangladesh bowls a valiant spell it is unlikely that the elegant left-arm pacer will come out to bat but he’s having all his bases covered. As of now, all eyes are set at Mirpur as the first ever Asia Cup T20 Final is all set to kick off on Sunday. 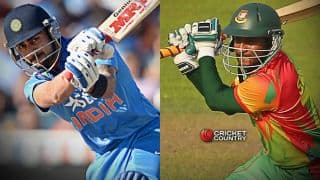