The latest video on mannequin challenge to surface is from the cricket fraternity. During the recently concluded first Test between India and England at Rajkot, the commentary team for the official broadcasters Star Sports got involved in one such video.

Social media has revolutionised the way noble initiatives reach to the masses and activism is promoted to reach to the right people in the most effective of ways. The ice bucket challenge that became a rage some time back is a prime example of the same. It was done to promote awareness of the disease amyotrophic lateral sclerosis (ALS) and gained cult following across the globe within no time. The latest such hot trend on social media these days is the Mannequin Challenge. It is a viral internet video trend that started last month where people remain frozen in action while a video is recorded, usually with catchy background music.

The hashtag #MannequinChallenge is used with such videos on popular social media platforms such as Twitter and Instagram. Such videos, where sportspersons or athletes remain motionless like mannequins, started surfacing last month with the students from Edward H White High School in Jacksonville, Florida being the first reported group to do so when they came out with their video on October 26, 2016. Their work has since inspired many other groups, especially professional athletes and sports teams around the world as they have started posting complex and elaborate videos with the same hashtag.

The latest such video to surface is from the cricket fraternity. During the recently concluded first Test between India and England at Rajkot, the commentary team for the official broadcasters Star Sports got involved in one such video. The commentary team, which involved former cricketers from both India and England, was involved in a video shared by BCCI s website as mannequins. Watch the video here.

The video shows the likes of Ravi Shastri, Aakash Chopra, Sanjay Manjrekar, Kapil Dev, L Sivaramakrishnan, Mike Atherton and Sir Ian Botham posing as mannequins inside the commentary box for almost entire duration and getting back to their routine as it nears its end.

The reason or motive behind promoting this hashtag is yet to be known, as it has not been ascertained yet whether it is for a noble cause or being done just for fun. The commentators, who had a nice time doing it, will be back in action when second Test of the five-match series between these two teams gets underway from November 17 at Visakhapatnam. 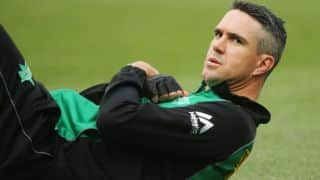 Kevin Pietersen has reasons to be 'furious' over this news daily