A bowler sledging another bowler is among the rare incidents in cricket.

A bowler sledging another bowler is among the rare incidents in cricket. One of such sporadic incidents and terrific one hits the mind is the one between Sreesanth and Andre Nel during the first Test between South Africa and India in December 2006.

Recently, something similar was witnessed during the fifth One-Day International (ODI) between Ireland and Afghanistan at Belfast. The visitors were chasing 266 against Ireland. Afghanistan had already lost their grip in the match as they were nine down for 225 when the incident took place. ALSO READ: Ed Joyce’s controversial run out leaves Ireland fuming; raises questions on Mohammad Nabi’s honesty

On the fifth ball of the 49th over, bowled by Kevin O’Brien, Afghanistan’s Dawlat Zadran, moved away from the crease at the very last minute as the leather crashed the stumps. O’Brien looked very upset and expressed his rage over Zadran.

The umpire declared it as dead ball and on the very next delivery; Zadran hit the ball over mid-off for a huge six. Zadran immediately signalled O’Brien to check where the ball has gone. No idea what made Zadran do that but that was one of a kind sledging by an Afghanistan cricketer.

Later, Ireland won the match by 12 runs and Zadran remained unbeaten at 31. The five ODI series ended in a draw with 2-2. 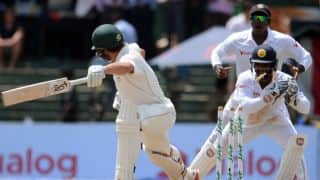