One may have often seen West Indian cricketers making fun of their opponents or teammates but this time they decided to take on their coach Phil Simmons.

Caribbean cricketers are known for their on and off field shenanigans and their fans just love such an act of theirs. They are playful and share a lot of joy around them. One may have often seen making fun of their opponents or teammates but on this occasion they decided to take on their coach Phil Simmons.

After a glittering victory in a practice against Zimbabwe in Sharjah, the team was in the bus when Simmons took a nap. While he was half asleep a Dwayne Bravo rolled a piece of paper and made it into a cigarette like pipe. After few moments, he placed it at tip of his mouth to which he quickly grabbed and made it look extremely cool. Everyone was amused by this instance and just can’t stop themselves from giggling.

Dwayne Bravo posted the video on his official Instagram account and wrote, “Hahahahah our coach taking a lil nap after a great win tonight lolol”

Bravo himself is very famous for his funny dance moves and amusing acts on the field. The West Indies team is expected to arrive soon in India for the ICC World Twenty20. 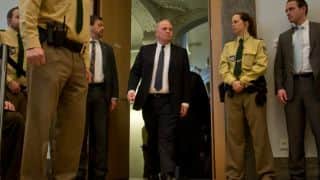