Star Indian opener Shikhar Dhawan is a fun loving character. He likes to be involved into the action some way or the other. If he fails with the bat, he makes it up with his livewire presence on the field. Off the field too the stylish southpaw loves to be in the thick of things. He has a solid fans base on social media platforms and he keeps interacting with his fans from time to time.

Recently, Dhawan shared a heart-warming video of his 2-year old son Zoravar reciting his first-ever poem. In the video, little Zoravar can be seen reciting the famous ‘Johnny Johnny Yes  Papa…’ poem with some help from his mother Ayesha Mukherjee. It is notable here that Dhawan is a family-man and devotes quality time to his two daughters – Rhea and Aliyah, and son along with wife Ayesha.

After India’s match with Pakistan, Dhawan tweeted – “My son saying his first poem!!! Beautiful moments of my life!!!Makes me smile!!”

My son saying his first poem!!! Beautiful moments of my life!!!Makes me smile!! pic.twitter.com/dZpKMIeOL6

Dhawan has not been among the runs in the ongoing ICC World T20, which is being played in India. In both the matches that India have played against New Zealand and Pakistan, Dhawan has not been able to reach double figures. India next play Bangladesh on Wednesday and the team will be hoping Dhawan gets some runs under his belt as they approach the crucial stages in the tournament. 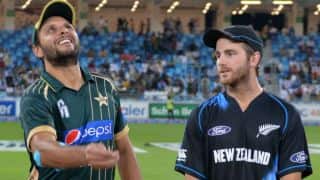