There’s one more side to Shoaib Akhtar's personality and the Rawalpindi Express has got a tremendous sense of humour.

Former Pakistan speedster Shoaib Akhtar might come across as a fast, furious and aggressive character due to his on the field persona, but he is extremely genial and affable personality off the ground. When he has a mic in his hand, he speaks his heart out just the way he used to bowl firing on all cylinders.

There’s one more side to his personality, as Akhtar has got a tremendous sense of humour. He is currently in India analysing the ICC World T20 2016 for official broadcasters Star Sports and during his assignment when he was covering one of the matches, the broadcasters caught him for a quick rapid fire. A witty person that he is, Akhtar chose to give funny one-liners replying to the questions.

In the video, Akhtar can be seen giving candid, hilarious and spontaneous answers to the questions. Not a bunny with the bat himself, he does well in the video to duck the bouncers that come his way in the form of tricky questions and hits some of them out of the park with his terrific sense of humour. Watch it to believe it! 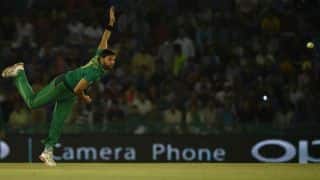