In this video, Imran Tahir was seen bowling deadly googlies and troubling the South African with his guile.

Cricket is not just a profession; it’s a passion for many cricketers. They don’t take this game as a national duty but a hobby. Many players learn cricket from backyard cricket and cricket played in the lanes. Many budding talents get inspired and make it big but the craze for such form of cricket never diminishes.

Cricketers are often seen having a quality time in the dressing room and building camaraderie. On this occasion South African cricketers were seen playing cricket in the dressing room during the second Test of the Basil D’Oliveira Trophy at Cape Town. In the below video, Imran Tahir was seen bowling deadly googlies and troubling the South African batsmen who seems to be Khaya Zondo.

Miller took to his Instagram handle where he uploaded the video and wrote, “It’s not all doom and gloom in pmb oval. Rain all day but still played serious game on day 5 pitch..haha. #sunfoilseries”

It’s eye-pleasing to see cricketers honing their skills despite rain playing the spoilsport. South Africa have made a comeback in the Test series as they have managed to draw the second Test after losing the first encounter. The onus of making a comeback in the four-match series is now on the hosts under new skipper AB de Villiers with the third Test commencing on January at Johannesburg. 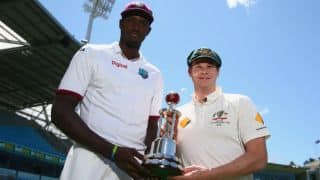 Jason Holder: Opening up Test not in best interest of West Indies