Indian Test skipper Virat Kohli is a hard working cricketer, he knows the amount of dedication and hard work an athlete or a cricketer puts in.

Indian Test skipper Virat Kohli is a hard working cricketer, he knows the amount of dedication and hard work an athlete or a cricketer puts in. India won the third Test against West Indies at St.Lucia and  claimed the four-match series. The Indian cricket team have had a magnificent run in the ongoing Test series but athletes from the nation have not enjoyed similar fortunes at the ongoing Rio Olympics 2016. Also Read: India’s series win against West Indies sets Twitter abuzz

Many critics have expressed their grief and lashed out at Indian athletes for not winning a medal at Rio Olympics 2016. India are yet to win a medal but still have a chance with many events scheduled to play. Kohli backed the athletes and emphasized upon the amount of hard work they put in. He also mentioned that a medal should not be the measure to gauge Olympians as Indian athletes do not get very good infrastructure and facilities. He also said that, athletes need to be backed and given confidence. Also Read: Swing it like Bhuvneshwar: Twitter reacts to pacer’s fifer on Test return

In the video below, posted by Indian Cricket Team on Facebook, Kohli speaks about the whole scenario at the post-match press conference. 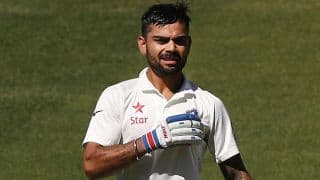