His activities other than cricket like singing, dancing have made rounds on social media.

West Indies all-rounder Dwayne Bravo is a whimsical cricketer and the fact is well-known. His activities other than cricket like singing, dancing have made rounds on social media. Bravo is also known for his shenanigans and digging fun at teammates. Bravo on this occasion was spotted doing something extremely out of the box. In a video posted by Bravo on his official Twitter handle, he was having fun with a huge snake rolled over his neck along with some kids around. Also Read: Gayle, Bravo and other ‘Champions’ sans Sammy back in WI T20I side for India series in the US

Bravo tweeted: “I hate snakes!! The things we do for kids. #DwayneBravoDayforKids #BravoWeekend.”

The occasion seemed to be for a social cause and the kids certainly loved one of the most entertaining cricketers in action. Bravo also posted a picture where his teammates Chris Gayle, Sunil Narine, Andre Russell, Kieron Pollard and many others were spotted together. He wrote, “Big up to my boys for the support. #Champion.” ALSO READ: Carlos Brathwaite named West Indies T20I captain; Twitter reacts

Bravo had a good run for Trinbago Knight Riders in the recently concluded Caribbean Premier League where his team made it to the second qualifier but lost to Jamaica Tallawahs in the decisive encounter. His services will be crucial in the upcoming T20I series against India by the end of this month. 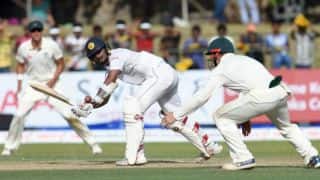