Ian Gould signaled “two more minutes” to the West Indies dug-out and then playfully dragged Gayle back to the dressing room when the Jamaican was ready to go in the middle in the 16th over.

When West Indies locked horns with Sri Lanka at M Chinnaswamy Stadium in Bengaluru during their ICC World T20 2016 match on Sunday, all eyes were on the crowd’s favourite and ‘local boy’ Chris Gayle, who had in the previous match smashed a record-breaking hundred against England. Gayle, who plays for the Royal Challengers Bangalore (RCB) in the Indian Premier League (IPL), was expected to repeat his performance at his home ground.

But as things turned out, the big left-hander from Jamaica tweaked his hamstring while fielding during Sri Lanka’s innings and as a result did not stay on the field any further. This prevented him from opening the batting for the West Indies, as he had not been off the field during the second innings for as long as he had been in the first. He had to wait for a certain amount of time to cover up that period before he could take part in West Indian innings.

When the crowd saw Andre Fletcher taking field with Johnson Charles, it went berserk and started booing and chanting “We want Gayle”. Though Fletcher tried to entertain the crowd with his stroke-filled 64-ball 84, the crowds kept chanting for Gayle to come out. They only got louder after the first wicket fell and Gayle still did not walk out to bat, with Marlon Samuels coming in at his usual No.3 position.

Gayle, who was witnessing all this from the dug-out, padded up, which further set the crowd’s excitement abuzz.  But even as the third wicket fell, Gayle still had to wait either for 11 minutes, or two more wickets to fall, in order to bat again. And even as he came near the boundary line all geared up to bat, much to the dismay of the fans at the ground, he was held back by fourth umpire Ian Gould.

Gould signaled “two more minutes” to the West Indies dug-out and then playfully dragged Gayle back to the dressing room. Once the match ended, Gayle returned to the sidelines without his batting gear to thank the wonderful Bengaluru crowd. He even got the selfies clicked with the passionate fans, a nice gesture on his part. 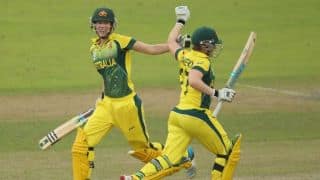 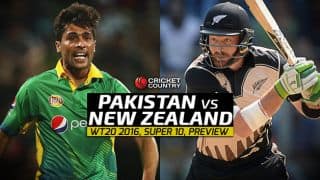