Indian southpaw Yuvraj Singh is among the most fun loving character in the Indian cricket team. Yuvraj has been regularly in the news since he made comeback to the India’s Twenty20 side. He is among those cricketers who carry a very healthy relation with Bollywood stars. Also Read: Kohli, Yuvraj, Pandya set stage on fire with their crazy dance moves

Continuing his good bond with Indian film industry people, Yuvraj has now challenged famous actress Neha Dhupia for Star Bucks funventures. First he showed how to do the challenge by doing the ball tapping with bat for around 25-30 times and then asked her how many she can do this.

After the ICC World T20 2016, Yuvraj went on to represent Sunrisers Hyderabad in the ninth edition of Indian Premier League, which eventually won the tournament and he played a crucial role in that victory. 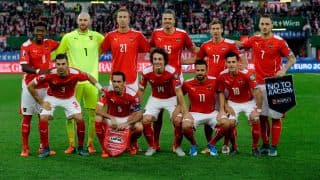