With the start of ICC World T20 2016, Yuvraj picks his six best fantasy players for T20Is.

Indian south paw Yuvraj Singh is known for his power hitting, and was a key player in India’s winning team in the inaugural edition of ICC World T20 2007. He was the best player for India throughout that tournament and played a scintillating knock in the semi-final against Australia by scoring 30-ball 70.

He is amongst the rare breed of players who have so far featured in all World T20 tournaments. Yuvraj Singh made a comeback in the Indian side in their tour to Australia in January. With the start of ICC World T20 2016, Yuvraj picks his six best fantasy players for T20Is, which includes the new comer Jasprit Bumrah along with experienced players Virat Kohli, AB de Villiers, Chris Gayle, Lasith Malinga and MS Dhoni.

The great @YUVSTRONG12 picks his Fantasy #Super6 with an interesting selection of @msdhoni as a bowler!? #WT20 pic.twitter.com/YOJxjalVbP 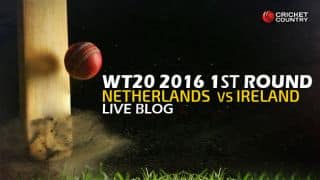