The first Test of the three Test series between India and South Africa is scheduled to start on January 5.

Virat Kohli and Anushka Sharma tied knot on December 11, 2017 in Italy. The newlyweds hosted two receptions in Delhi and Mumbai shortly after return from their honeymoon in Finland. Kohli and Anushka took to Twitter to wish their fans a Happy New Year. They shared am image of themselves standing in the foreground of a picturesque mountain near Cape Town.

Wishing you all a very happy, healthy and prosperous New year. Love and light to all. pic.twitter.com/zYKWLXz6ka

The couple was earlier spotted shopping in Cape Town; the venue for the first Test match. Yesterday, Shikhar Dhawan, who is also travelling with his family was seen with Kohli grooving on beats of a local band in Cape Town.

India were forced to practice indoors due to rain. The first Test of the three Test series between India and South Africa is scheduled to start January 5. 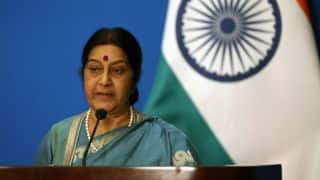