After the high-profile reception in Delhi that was attended by who-is-who of Indian politics, Virat Kohli and Anushka Sharma are gearing for a grand gala in Mumbai. The second reception is expected to take place at Mumbai s posh The St Regis Hotel situated in Lower Parel as reported by GQIndia.com. The St Regis is owned by Starwood Hotels and Resorts. Virushka as the pair is fondly called, held their Delhi reception at Taj Palace Hotel.

The Mumbai reception will luminaries from the world of entertainment and cricket ascend down on earth. Kohli married Anushka in a private ceremony in Tuscany, Italy, to steer clear of media. Bollywood biggies like Shah Rukh Khan and Katrina Kaif are expected to grace thiz occasion. The Indian cricket team is also expected to make their presence felt at their captain’s wedding reception. 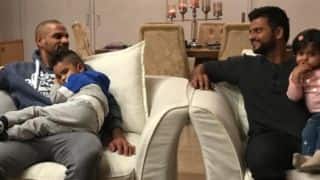