It’s a known fact that Indian cricket star Virat Kohli is a huge fan of tennis legend Roger Federer. And during the Brisbane Open earlier this year, Kohli made it a point to get clicked with him. Now the Indian Test captain has joined the International Premier Tennis League (IPTL) bandwagon and has become co-owner of UAE Royals, which will be led by Federer.

During the unveiling of the UAE Royals team, Kohli in a report from PTI said that he has always followed tennis with great interest and is glad to be a part of a professional tennis league team. Talking further of his fondness for Federer, he said, “I am a huge fan of Roger Federer and with him joining the UAE Royals, my decision to be on board with the team was firm. The UAE Royals feature some of tennis’ greatest players and I am confident about the prospects of the team in the IPTL. I am also excited about the format of the IPTL, which I am sure will drive further interest in the game of tennis.”

In the inaugural season, Federer had played for Indian Aces and this time he will join Goran Ivanisevic, 2001 Wimbledon Champion Ana Ivanovic, Daniel Nestor, Kristina Mladenovic and Tomas Berdych. The UAE leg of the league will be held from December 14 to 16 at the Dubai Duty Free Tennis Stadium.

Kohli, who already co-own FC Goa in Indian Super League, had a good inaugural season with the side and fans will hope that continues with his venture in tennis too. 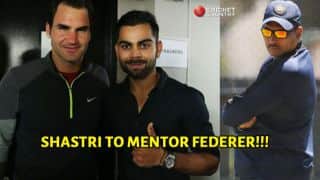