The two were spotted at the Mumbai airport recently when Kohli dropped Anushka as she left for Budapest for her work assignment.

Star Indian batsman Virat Kohli has had an on and off relationship with his lady love, top actress Anushka Sharma. Both have shared a blow-hot-blow-cold relation ever since they came together during the shoot of a shampoo’s commercial. Since then, there are been ups and downs but the star couple has stuck together.

Some time back, there were rumours that the two have split. Anushka was cited as the reason behind it, as she wanted to focus on her career. Kohli even un-followed her on the social media platforms, only adding fuel to the fire. But just when the media dubbed their relationship as done and dusted, the two were spotted together in Bandra over a dinner. Also Read: Virat Kohli, Anushka Sharma spotted together at Bengaluru ahead of Qualifier 1 of IPL 2016

Since then, they have been spotted one more time during the Indian Premier League (IPL) season 9. Despite their packed schedules, the two took some time and met during a victory celebration for one of Royal Challengers Bangalore’s (RCB) wins. And now, the two were spotted at the Mumbai airport recently when Kohli dropped Anushka as she left for Budapest for her work assignment.

It seems the two of them got to spend some quality time in Mumbai before Anushka left for her work. Their spotting has once again confirmed that the two are pretty much going strong and it’s just the work commitment that is keeping them apart. Both have been super busy for a while now as Kohli just concluded a hectic cricket schedule which saw him play non-stop cricket at a stretch while Anushka completed her much-awaited movie ‘Sultan’ with Salman Khan. 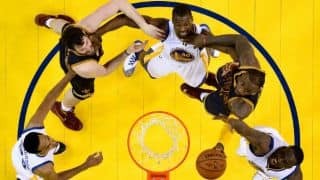