The series aimed at kids will premiere on Kohli's birthday, November 5.

India cricketer Virat Kohli will soon be seen in an animated superhero avatar in the small screen series, Super V. The series aimed at kids will premiere on Kohli’s birthday, November 5.

In the show, Kohli is imagined in a completely different avatar as an animated teen superhero named Super V. The character is inspired by Virat. The series marks Star India Network’s venturing into coming-of-age superhero animation.

“As a kid, I was always fascinated with superheroes and animation is one of the best mediums to reach out to younger audiences. With Star India’s extensive reach, I am positive that the show will entertain and engage viewers across age groups,” Kohli said at the trailer launch event.

“Super V is an exciting series that shall captivate viewers’ interest with its unique storytelling and lovable characters. With the tagline of ‘Let’s Play’, it’s also an attempt to inspire kids to be more active,” he added.

Every episode of the 13-part series will come with a promise of humour, action and drama. The weekly show will narrate story of how a teenager at the cusp of adulthood finds his identity between aspirations, parental expectations, and peer pressures.

Kohli will conclude every episode with a message to his young fans summarising the key takeaway from the story. 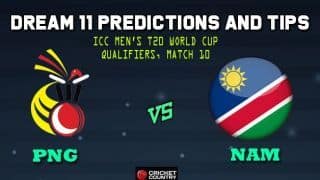