Kohli's relationship with Bollywood star Anushka has been in the news ever since they decided to date each other.

It is weird and we know that, and logically speaking there is no connection but in India-Pakistan games, fans’ sentiments defy logic and that’s how Anushka Sharma caught the Twitter trends post India’s memorable win.  India beat Pakistan by five wickets in the fourth T20I of the Asia Cup in Dhaka and once again the hero for India was Virat Kohli. How often the champion has done in for India?

It seems he raises his bar against Pakistan and this time too delivered a man-of-the-match performance. India may have been chasing only 84 to win but the inspired spell of Mohammad Amir made it extremely tough for the Indians till Kohli bailed them out.

Kohli’s relationship with Bollywood star Anushka has been in the news ever since they decided to date each other. However, in the recent times, the news of their break-up surfaced and both the celebrities had unfollowed each other in social media platforms. Anushka in the past has been pilloried for Kohli’s off form and this time Twitterati poked fun for various reasons. While few tweets were nasty as they ridiculed her for doing a favour and going out of Kohli’s life but most of them were good natured. Here are some of the tweets:

Thanx @AnushkaSharma It was an awesome #match this eve and Thanx 2 u that we #won. #BreakUpGuy Did well. #IndvsPak #ViratKohli

What do you think @AnushkaSharma is up-to right now? #IndvsPak pic.twitter.com/bFravbL8lT

Dear @AnushkaSharma , please get back with Virat Kohli. You guys are perfect together.

Rare photo of Virat kohli and anushka sharma after the match pic.twitter.com/POuCOna103 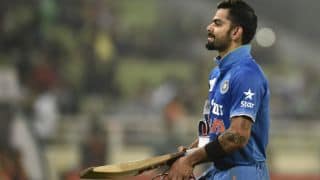