Virender Sehwag: I am not bothered about the crowd, I didn’t invite them

Virender Sehwag: I am not bothered about the crowd, I didn’t invite them

In the Australia tour of 2003-04, Shivlal Yadav had said him that if he scores big runs, he will be respected and he kept that advice in mind and scored some big hundreds.

Virender Sehwag is a crowd puller. He has the rare ability to fill stands and that’s irrespective of the format. The man who is an entertainer in its truest sense makes it clear that he isn’t “bothered about the crowd.”

The brutally frank cricketer, who is fondly called the “Nawab of Najafgarh”, in an interview with Indian Express recently, dismissed the pressure on him to entertain.

(READ: Virender Sehwag: Players watch videos to find out their mistakes, I watch it to enjoy my boundaries)

“I am not bothered about the crowd. People come to watch me. They are coming with a risk. Before they reach the stadium, Sehwag might have gotten out and gone into the dressing-room. It happened many times. Why should I bother? I didn’t invite them. I invited my friends during the World Cup. I scored 30-odd runs. I should enjoy my game, try to score runs and concentrate. I should control my mind rather than think about people and my reputation,” said Sehwag.

Sehwag admitted that he always wanted “respect” and that led to his hunger for runs. In the Australia tour of 2003-04, Shivlal Yadav had said him that if he scores big runs, he will be respected and he kept that advice in mind and scored some big hundreds. He believes being aggressive and just hitting sixes aren’t enough to earn respect, but it’s the big knocks that make the difference.

Sehwag added, “It’s a fact that if you start scoring big hundreds, people will give you respect. Now they say, ‘Wow! He is the only one who has scored a triple century for India’. That is the kind of respect that I am getting from players. On ‘Comedy Nights with Kapil’ TV show, even Sunil Gavaskar bowed to me. That’s because of that triple-century. It’s not because I hit a six. It’s because of the 300 that I made with a six. The kind of respect you get when you score 200, 250 or 300.”

The Delhi dasher shared an interesting anecdote on Rohit Sharma, who last year went on to surpass the highest One-Day International (ODI) score of 219, that was set by Sehwag in 2011.

“I asked him (Rohit Sharma), how many double hundreds or triple hundreds he has in First-Class cricket. He said ‘none’. I said go and score. The moment he scored a triple century, he called me. Very good, I said, now you will get picked for Tests. Now everybody is talking about Rohit Sharma,” said Sehwag.

Sehwag further said that he was never intimidated by a bowler’s reputation and claimed that he never had any difficulty while playing mystery bowlers like Ajantha Mendis or Saeed Ajmal, and when asked on who he found tough to pick, the cricket legend answered, “Muralitharan. Because of his action, it was very difficult to pick his doosra. Sachin (Tendulkar) once told me that if his thumb is up, he will bowl doosra, but because of his darker complexion, I was never able to spot it. After that I decided whatever and wherever he bowls I will drive through covers or push it towards point. That worked.” 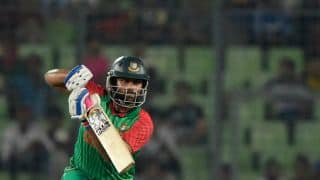