Virender Sehwag, Shahid Afridi and other cricketers express their grief over Orlando Night Club shooting i

Cricketers around the world condemned this incident and players like Virender Sehwag, Shahid Afridi, Anil Kumble, Imran Khan, et al, expressed their condolences through their tweets.

It was huge shocker for the whole world when the news on Orlando gay nightclub shooting incident first broke. Around 50 people were gunned down by an American-born 29-year old Omar Mateen. This incident is said to be one of the most deadliest ones when we talk about mass shooting in the United States of America (USA) and worst terror incident after 9/11. Also Read: Kohli, Sehwag and other cricketers congratulate Saina Nehwal on Australian Open Super Series win

Going by the media reports, back in 2013, Mateen was interviewed by FBI but no threat was found. However, now his ex-wife thinks that he was mentally ill. Good that Orlando police shot and killed Mateen and after that ISIS claimed that Mateen was their man but it is something yet to be ascertained.

Cricketers around the world condemned this incident and players like Virender Sehwag, Shahid Afridi, Anil Kumble, Imran Khan, et al, expressed their condolences through their tweets.

2- wonder how we in Pak had felt or reacted if an immigrant whom we had provided for had killed innocent 50..

My thoughts and prayers go out to all the victims & their families. Rab Rakha! #OrlandoNightclubShooting

The planet has given us so much, we are eliminating ourselves from it slowly but surely.Orlando massacre is just reaffirmation enough.SAD — Ashwin Ravichandran (@ashwinravi99) June 13, 2016

Heart goes out to all those affected by #Orlando shooting. May the souls of the deceased rest in peace.

Shocked at the Orlando massacre & strongly condemn this act. My prayers for the victims & their families. 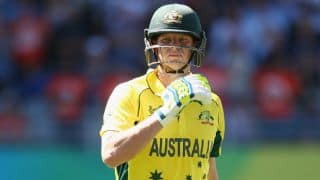