If one asks any questions, Sehwag will answer straight what he feels, unlike most of the cricketer who tries to be diplomatic to avoid any controversies.

Former Indian cricketer Virender Sehwag is well-known for his gentle attitude and calm nature which he successfully displayed with the bat. While batting, his only motive was to hit the ball irrespective who is bowling from the other end or how fast the ball is going to come. If one asks any questions, he will answer straight what he feels, unlike most of the cricketer who tries to be diplomatic to avoid any controversies.

Recently, during the sneak peak of famous stand up comedian Vikram Sathaye’s new humour show —What the duck, Sehwag was asked about on India and Pakistan rivalries to which he replied in his own witty style. It all started when Sathaye expressed the general view among fans that the Indian team can lose to anyone, but not Pakistan. In return, Nawab of Najafgarh recalled his playing days against Pakistan and said, “They would be worried about their friends teasing them the next day in school. So, imagine the pressure on me from my kids when I used to bat,” as reported by MidDay.

Later,Sathaye said,”Shoaib Akhtar has been praising Indian players a lot these days,” and on this Sehwag replied in his classic way and added, “that’s because India main business chahiye (they want business in India). They know India is a huge market for cricket. If they talk good about Indian cricket, they will get business. Sab paise ka chamatkar hai yeh (it’s the power of money).”

Seems like Sathaye was in full mood and once again pointed the former opening batsman of India by mentioning, “Rana-ul-Naved is also talking a lot of good things about our cricket.”

In return, Sehwag bounced once again and quipped, “He may be taking a cue from Shoaib, hoping that Star Sports or someone will pick him. You see all these ex-Pakistani cricketers want some business from India.” 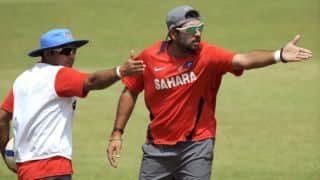