VVS Laxman’s 281 against Australia at the Eden Gardens in Kolkata has been rated as the greatest Test performance of the last 50 years.

Those who witnessed it, they will surely agree with the poll results. VVS Laxman’s 281 against Australia at the Eden Gardens in Kolkata has been rated as the greatest Test performance of the last 50 years. ESPN’s digital magazine Cricket Monthly published the poll in their January issue where renowned cricketers, commentators and journalists rated Laxman’s performance as the best in the last 50 years. Also read: VVS Laxman: 23 facts about India’s ‘Very Very Special’ cricketer

India were up against a world class Australian side and having lost the first Test in Mumbai, they were trailing by 274-runs in the Kolkata Test and were asked to follow-on. Laxman, who had scored 59 in the first innings, was promoted to No.3 in the second. He went on to score 281, then India’s highest score in Tests. He added 376 with Rahul Dravid (180). The Sourav Ganguly-led Indian side went on to win the Test and later the series.

A report from PTI quotes several players from the Australian camp who witnessed the feat. Shane Warne, who was at the receiving end, recalls, “I was bowling in the footmarks and Laxman was hitting the same ball through cover or whipping it through midwicket. It was so hard to bowl then.”

Ricky Ponting remembers, “His work through the leg side in particular was a source of wonderment to many of us. Ultimately we bowled for near enough to two days at him without even looking like getting him out.”

It is a matter of great pride that an Indian has been honoured with this. 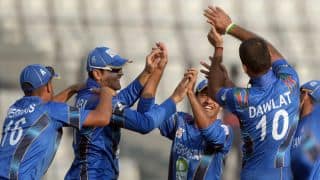