Wahab has shown glimpses of what he is capable of and many feel he could carry Pakistan s pace bowling legacy forward.

Wahab Riaz, born on June 28, 1985, is one of Pakistan s best fast bowlers in recent times. Though he hasn t had a very long stint at the highest level, being in and out of the side, Wahab has shown glimpses of what he is capable of and many feel he could carry Pakistan s pace bowling legacy forward. Nishad Pai Vaidya picks 12 facts about Wahab.

Wahab admitted that when he was young, he used to bowl slow-medium. Former Pakistan fast bowler Aaqib Javed put him through the grind to become a fast bowler. In a chat with ESPNcricinfo, Wahab said, “When I started I was really, really a medium-pace bowler, very slow. But Aaqib Javed worked on me. He always said, ‘If you don’t bowl fast, you can’t be a fast bowler.’ So he really pushed me, made me work hard for six, seven years and then I started to bowl fast. Today, Wahab clocks in the late 140s.

In January 2002, a 16-year-old Wahab made his First-Class debut for Lahore Whites against Peshawar. Future Pakistan teammate Kamran Akmal played alongside him in that game. Yasir Hamid, Arshad Khan, Wajahatullah Wasti and Fazl-e-Akbar were in the opposition. Wahab went wicket-less in that game.

In February 2001, Wahab played for Pakistan under-17s in the ACC under-17s Asia Cup in Bangladesh. Wahab played only one game in that tournament against Singapore under-17s. Some of his teammates included Adnan Akmal, Salman Butt and Khalid Latif. That tournament featured Mohammad Ashraful, Parthiv Patel, Shikhar Dhawan, Stuart Binny and Mashrafe Mortaza to name a few.

5. Pakistan under-19s and the World Cup

In 2003-04, Wahab was a part of the Pakistan under-19 setup and also played the under-19 World Cup in Bangladesh in 2004. Wahab was not a consistent member of the side and made sporadic appearances.

6. A consistent season and an international call-up

During the 2007-08 domestic season, Wahab had a consistent outing. In 14 matches, he took 68 wickets at 20.54. That helped him win a national call-up when Zimbabwe toured Pakistan in early 2008. He found some early success against Pakistan and Zimbabwe in One-Day Internationals (ODIs), but then ran into Virender Sehwag and Gautam Gambhir in Dhaka. Wahab conceded 86 runs though he picked up two wickets. He played one more game against Sri Lanka before waiting for two years for a Pakistan call-up.

Wahab made his Test debut against England at The Oval in 2010 and announced himself with a spell of five for 63. That helped Pakistan bowl England out for 233 in the first essay, setting up the platform for victory. However, that victory was soon forgotten as Pakistan cricket got engulfed in the spot-fixing scandal during the next Test at Lord s.

The world first took notice of Wahab when he delivered a magnificent spell of 5 for 46 in the all-important ICC Cricket World Cup 2011 semi-final against arch-rivals India at Mohali. India had started very well but Wahab s tight bowling kept a leash on them. The ball that stood out was to the Man of the Tournament Yuvraj Singh as a fast, inswinging yorker beat the man in form. India still managed to win the game.

Soon after Wahab s five-wicket haul against India, he joined Kent in English county cricket. Wahab made a mark in T20 cricket as he recorded his maiden fifer in the format. During the game against Gloucestershire, he sparked a collapse that saw the opposition fumble from 151 for four in the 18th over to 166 all-out in 20. Wahab ended with five for 17. In2015, he appeared for Surrey.

10. Missing 10 wickets but getting a hat-trick

During a Quaid-e-Azam Trophy game between Lahore Ravi and Lahore Shalimar in 2013, Wahab recorded figures of nine for 59, narrowly missing out on a chance to take all ten. During his nine-wicket haul, he had a hat-trick. Ahmed Shehzad, Adnan Akmal and Waqas Ahmed formed the hat-trick for Wahab at the top. Until 124 for eight, Wahab had accounted for all the wickets. However, Aizaz Cheema then dismissed Imran Ali. Wahab completed the spell by dismissing the last man Adnan Rasool.

11. Playing while his daughter was in hospital

When Wahab was playing for the Lahore Lions in the Champions League T20 (CLT20) 2014 in India, his daughter was undergoing treatment in a hospital in Pakistan. My daughter is still in the ICU. She was very critical and we were not sure if she would make it or not. By the grace of God, hopefully, she will recover well, Wahab told Wisden India.

12. The spell to Shane Watson and the reprimand

Wahab bowled a great spell against Australia during the ICC Cricket World Cup 2015 quarter-final at Adelaide. There is something about Wahab that helps him rise to the occasion in crunch games against tournament hosts. On this occasion, Pakistan were only defending 214 and Wahab gave Australia a scare when he dismissed David Warner and Michael Clarke in quick succession. He was bowling quick and short, intimidating the batsmen. Shane Watson faced the music and a bit of a verbal duel.

Wahab kept banging it short, but Watson managed to sway out. Ultimately, Watson hooked it to fine-leg, who dropped it. With that went Pakistan s chances as Watson took them to victory. Through that, Wahab won hearts and even embraced Watson at the end of the game. Both men were fined for exchanging unpleasant words,though both praised each other after the game. The cricket world was at odds with the International Cricket Council s (ICC) decision, so much so that the legendary Brian Lara told NDTV, I loved the exchange. It was above board as far as I’m concerned and I can’t wait to meet him. I want to meet with Riaz guy. I’ll pay the fine.

Wahab later had an on-field altercation with Pakistan opener Ahmed Shehzad in one of the games from the inaugural PSL. 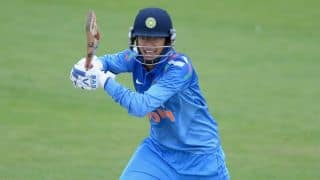