It is not often when a professional cricketer's wife or girlfriend shares more limelight but in Australian all-rounder Ben Cutting's case, it is different.

It is not often when a professional cricketer’s wife or girlfriend shares more limelight but in Australian all-rounder Ben Cutting’s case, it is different. Cutting is dating Erin Holland, Miss Australia 2013. The stunning Erin grabs more eyeballs for the obvious reasons while Cutting has been waiting in the national fringes. READ MORE: Sunrisers Hyderabad beat Gujarat Lions by 4 wickets at Delhi, Stars and Flops

But Ben Cutting did have his moment of brilliance in the second qualifier of the Indian Premier League (IPL), which turned out to be one of the best games in the tournament. Sunrisers Hyderabad’s (SRH) skipper David Warner led his team to victory, courtesy a valiant 93, and sealed the berth in final against Royal Challengers Bangalore (RCB), which will be played on Sunday. ALSO READ: Video: When Ben Cutting’s exceptional athleticism saved 5 runs for Sunrisers Hyderabad

During and after the match, SRH all-rounder Cutting’s girlfriend Erin tweeted about his amazing fielding effort and then on the team’s victory by saying “WELL WORTH NO SLEEP”. It was one of the most incredible fielding efforts ever seen and it saved his team, five runs.

Amazing effort @Cuttsy31 ! Gave me a heart attack with that superhuman save though @SunRisers #OrangeArmy #OrangeVoice #SRH

The match went down the wires and Warner finished it in the final over. By the time, it finished it was pretty late in Australia but staying awake was worth it for Erin.

WELL WORTH NO SLEEP!! What a win @SunRisers !!! Can’t believe it!!! #OrangeArmy #OrangeVoice

Cutting bowled very well in his spell of three overs by conceding only 20 runs and scalped two crucial wickets of Aaron Finch and Dwayne Smith. He was unlucky with the bat after he got a poor decision of caught behind from the umpire. However, his spectacular athleticism at deep mid-wicket was one of the moments of the cash-rich league. 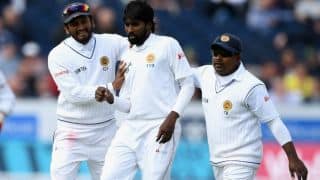