Both Lillee and Miandad were popular and renowned cricketers. With their skills, they were certainly among the finest but both were abrasive characters.

In February 1981, Dennis Lillee got involved in an ugly controversy that almost saw the Indian captain Sunil Gavaskar forfeit a Test. However senses prevailed as the Indian manager Shahid Durrani stepped in and diffused the tension and an inspired India went on to beat Australia.

However later that year, Lillee got involved in another incident that not only tarnished his reputation but threatened to ruined the image of the sport.

The person with whom he got involved was the Pakistan skipper Javed Miandad. Both Lillee and Miandad were popular and renowned cricketers. With their skills, they were certainly among the finest but both were abrasive characters.

In the first Test at Perth, Australia had set Pakistan a near impossible target of 543 and were staring at a defeat with their captain Miandad trying to fight it out.

Here’s what happened: Miandad played a Lillee inswinger to the on-side for a single. While completing the run, he collided with the bowler. From the video, it’s quite evident that Lille was to be blamed as he seemed to deliberately move into the path of the batsman and Miandad had to push him out of the way to make it to the other end.

What followed next almost led to a physical fight. Lillee, on his way back kicked Miandad, who holding the bat like a spear rushed towards Lillee, and had umpire Tony Crafter not come in the way, one never knows what would have happened.

In preventive measures, Lillee moved back, but before he could charge again Australian captain Greg Chappell and umpire Crafter blocked him. An uglier scene was averted. It was the end of the over then and Lillee headed to the boundary.

Lillee’s action was criticised from all quarters. Former Australian captain Bob Simpson called it “the most disgraceful thing I have seen on a cricket field.” Australia’s star all-rounder of 1940s and 50s Keith Miller even called for the “suspension of Lillee for rest of the season.”

However captain Chappell defended his premier pace bowler and put the blame on Miandad saying that the Pakistani got physical first and called his act as the “most disgraceful thing I have seen on a cricket pitch.”

Lillee was fined A$200. Australian players did find him guilty but they all maintained that Lillee was provoked. Pakistani management wasn’t happy with the punishment but Australia’s team manager John Edwards explained it in an interview.

“Dennis did have caused a retaliatory action. We don’t condone this. The reason the fine was A$ 200, which was low because they (Australian team) thought that the first actual physical contact was made by Javed,” said Edwards.

He further added that Miandad’s action was done on purpose. “They (Australian team) thinks that he (Miandad) shoved him (Lillee) pretty forcibly which shows up pretty well in the footage. Had Javed not done that, nothing else would have followed.”

Miandad’s version then was certainly different, “When I was completing the run, Lillee stopped me and was abusing me. I saw the ball going to Rodney Marsh and he tried hitting the other end, obviously I had to push him (Lillee). After that he kicked me and then umpires had to come in between us. He then used abusive and dirty words, which upset me.”

Lillee had apologised to the Pakistani side for his behaviour, but maintained that his actions were retaliatory. The Australian bowler had then said, “Before that we exchanged some pleasantries. Between us it’s going on for some years now. (About the kick) I believe in an eye for eye. If someone started something then you within your rights to do something. I feel it wasn’t right to do (to kick), but also bearing in mind that he was charging down to me with the bat in his hand, he too was pretty keen. One has to look at both sides and I feel there would have been no incident had he not charged into me. I would like to put the blame completely on his shoulders.”

Pakistan’s then manager Ijaz Butt had recently spoken about the incident, as he said, “If he (Lillee) were one of my players he would not play Test cricket again.”

In Cutting Edge: My Autobiography, Miandad wrote about the incident. He mentioned as he set off for a run, Lillee stepped back at the last minute to block his path and the batsman had to push him out of the way to reach the crease. Miandad wrote that Lillee kicked him on the pads and swore as he went back to his run-up and almost in reflex; the batsman turned around and threatened him with his bat.

Miandad mentioned that he was made the villain of the plot and is convinced that Lillee’s action was prompted by the fact the “visitors were from Pakistan”, as he went to write, “Had I been the captain of England, I wonder if idea of retaliating with a kick on the pads would even have entered Dennis’s mind.”

Both the volatile cricketers did eventually patch up; however their versions of events differ in their respective autobiographies as they keep justifying their actions. Whatever was the truth, it was definitely one of cricket’s most ugly incidents. 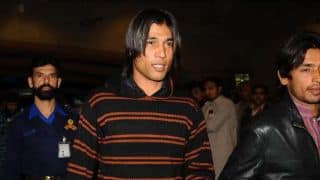 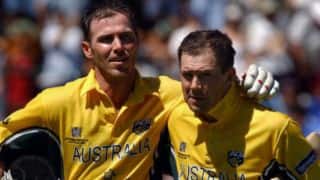