West Indies bowled out for a mere 25 against Ireland in 1969.

In the West Indies tour of England and Ireland in 1969, the team from the Caribbean played two matches against the Irish team in between the regular matches in England.

The ground at Sion Mills was full with people on the day of the game as overnight rain had dampened the ground and the pitch. West Indies stand-in captain Basil Butchers arrived late to the ground and won the toss and chose to bat without even looking at the pitch. The West Indies camp presumed that, it will be an easy play against the minnows, Ireland.

The casual approach of West Indies soon turned out to be a serious embarrassment as one by one wickets tumbled. West Indies players couldn’t even get their eyes on the pitch before they played a lose shot to gift their wicket to Ireland bowlers – Alec O’Riordan and Douglas Goodwin. Even the mighty Clive Lloyd fell cheaply. Clyde Walcott, their manager played the match as regular players sat out.

In 25.3 overs, West Indies were bowled out for a mere 25 runs in the first innings, the run rate being even less than a run an over. The scores of 1, 0, 2, 2, 1, 6, 0, 0, 9 (not out), 0 and 3 looked more like jumbled phone number. Goodwin took five wickets, while Riordan finished with four, figures which only they can dream for against an international team of that stature.

In reply, Ireland scored 125 for eight and declared as West Indies agreed to play out the second innings to the delight of the 2000 fans gathered there.

West Indies were in dire again as they were two for two but captain Butcher saved the day scoring a half-century. West Indies finished at 78 for four as the match ended in a draw but Ireland were declared the winners owing to a first innings lead. The Caribbean giants must have breathed a sigh of relief that the match was a one-day affair. It was a monumental moment for the Irish team as West Indies faces were down and Butcher was accused of the casual approach. England Women train ahead of series against New Zealand 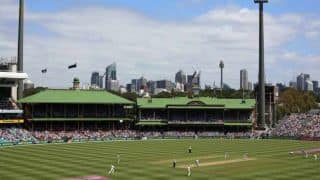