Mithali Raj Retires: Never-Heard-Before Facts About One Of India's Finest Batters You Would Love To Know

Mithali Raj Retires: Never-Heard-Before Facts About One Of India's Finest Batters You Would Love To Know

Mithali Raj started playing with the likes of Anjum Chopra and Purnima Rao and soon became the most dependable batswoman for the team.

Born, December 3, 1982, Mithali Dorai Raj became one of the most important players of the Indian women’s team since she made her debut in One-Day International (ODIs) in 1999. Mithali started playing with the likes of Anjum Chopra and Purnima Rao and soon became the most dependable batswoman for the team.

1. Initially a dancer before cricket, Mithali was into classical dancing. During her childhood and teenage days, she learnt Bharatnatyam and wanted make her name in the same field. But it seems she was destined for something else and later she became one of the most successful players of Indian women’s cricket team.

2. A lazy girl, cricket was never Mithali’s first choice, infact it was never on her to-do list. Her parents introduced Mithali to cricket because she was very lazy and since her father was an officer in Indian Air Force, he wanted his daughter to be disciplined and active. In an interview with BCCI, Mithali said, “From the beginning I played cricket only to make my parents happy.”

5. Mithali scored unbeaten 114 runs on her debut match against Ireland Womens team in 1999, which is third highest score made by a woman cricketer in her ODI debut after Lynne Thomas (134 in 1973) and Nicole Bolton (124 in 2014). In the same match, along with Mithali, Reshma Gandhi also scored an unbeaten ton, which was also her debut ODI. Reshma scored her century first, so she became the first Indian to score a hundred in ODI debut, followed by Mithali in the same match.

6. When she made her debut against Ireland, Mithali was just 16 years and 250 days old. This made her the youngest women’s cricketer to score a hundred on her debut in ODIs.

7. There have been only five woman cricketers who have scored hundred on debut and Mithali is the fourth player after Enid Bakewell, Lynne Thomas and Reshma Gandhi.

8. Mithali was the part of Indian women’s best partnership in ODIs and that too in her debut match by scoring unbeaten 114 runs along with her partner Reshma who made 104 not out. Their partnership of unbroken 258 runs is the third best for any wicket and second best for first wicket.

(Abhishek Kumar is a cricket devotee, who was staffing with CricLife and CricketCountry.com when this article was first published on the site on December 3, 2016) 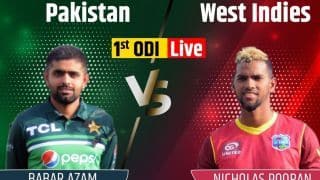