CricketCountry shortlists the top innings in cricket's shortest format from the year gone by.

There were several batting performances during the year that created headlines. From Aaron Finch bettering his own T20I world record of highest individual total to Dinesh Karthik’s cameo that culminated into a last-ball six in the final of Nidahas Trophy, here are our selection of the top innings in cricket’s shortest format from 2018.

During a three-match T20I series, Colin Munro became the first batsman in T20I history to record three centuries when he crushed a hapless Windies attack to clobber 104 off 53 in the third and final match. He was in terrific form having scored half-centuries in his previous two innings. Together with Martin Guptill (63 off 38) he added 136 runs for the first wicket. He struck three fours and 10 sixes as New Zealand piled on 243/5 to which their opponents mustered 124-all out. New Zealand won the series 2-0.

It was Maxwell’s night at Hobart as his stunning all-round show powered Australia to what eventually turned into a comfortable win during a T20I tri-series involving New Zealand and England. With the ball, he picked up three wickets to slow down a charging England batting lineup. He then would play the decisive role with the bat too as Australia lost three early wickets in the chase of 156. From 82/3, Maxwell changed the complexion of the game, hitting 10 fours and four sixes to remain unbeaten on 103. He finished the chase with a six to overhaul the target in 18.3 overs.

A record-breaking affair between New Zealand and Australia in which 488 runs were scored across 38.5 overs and the ground was peppered with a record-equaling 32 sixes. The way Australians successfully completed the highest chase in T20I history pushed a 49-ball 100 from Martin Guptill to the background. The innings was powered by openers David Warner and D’Arcy Short. Warner belted four fours and five sixes in a 24-ball 59 knock as with Short, he struck a century partnership in no time. Short was equally effective hitting 76 off 44 which had eight fours and three sixes. The chase was completed with seven balls to spare as Australia made 245/5 in reply to New Zealand’s 243/6.

From a pitch where spinners were getting a lot of purchase, Dhawan bid his time and pounced on the mistakes of Windies bowlers to hit 92 off 62 in a successful chase that went to the last delivery and a misfield gave India the winning run. India had lost opener Rohit Sharma and No. 2 KL Rahul inside the Powerplay overs. Taking a cue from how the tourists had shaped their innings on a surface where spinners should have called the shots, Dhawan and Rishabh Pant opened up against the pacers to give the chase the decisive push in the final 10 overs from which India needed 106 runs. Dhawan struck 10 fours and two sixes before being dismissed in the last over.

On an unknown wicket as Lucknow’s AB Vajpayee Stadium made it’s T20I debut, Rohit blossomed while others struggled. The pitch was flat yet barring Rohit rest failed to find runs from it. He belted eight fours and seven sixes in his 61-ball 111 to power India to 195/2. It was his fourth century in the format as he became the first batsman to do so, overtaking Munro with whom the Indian had earlier drawn level in England. Rohit ate 38 deliveries for his first fifty, his next fifty came in just 20 deliveries as he creamed two fours and a six in the final over, bowled by Carlos Brathwaite to help India to a winning total.

Karthik did what every batsman dreams of – a six off the final delivery to win a match. And that too in the final of a tri-series. He walked in with the odds firmly stacked against Indian team. 34 off 12 wasn’t in the impossible territory but punters must have been betting heavily in Bangladesh’s favour. Enter Karthik. He began his innings with a six off the first ball faced and went on to blast 22 off his first six deliveries . Then came the final over from which were needed 12. Soumya Sarkar did well to limit India to three runs off the first three deliveries. Vijay Shankar then struck a four before holing out off the following delivery. Karthik faced the final delivery with five needed. A flat six followed that sent Indian dugout and fans into wild celebrations. Karthik remained unbeaten on 29 off 8 as India lifted the Nidahas Tri-Series trophy.

Australia T20I captain Finch was in punishing mood. The quality of Zimbabwe bowling attack notwithstanding, this was an innings of extreme power-hitting. Finch was head and shoulders above everyone. He bettered his own T20I record of 156 by hitting 172 and was within three runs of eclipsing the all-time T20 record (175 by Chris Gayle). He fell in the final over but not before blasting 16 fours and 10 sixes. Such was his domination that his opening partner D’Arcy Short struck 46 off 42 in an opening stand of 223. Finch fell off the fourth delivery of the final over in an unfortunate manner hit wicket. Australia posted 229/2. Zimbabwe managed 100 less in reply.

Zaman added a second chapter to his final heroics as he starred in Pakistan’s title winning chase against Australia in Zimbabwe T20I tri-series at Harare. Chasing 184, Pakistan endured the worst possible start losing Sahibzada Farhan (0) and Hussain Farhat (0) in the first over to Glenn Maxwell. Captain Sarfraz Ahmed lasted till the final over of Powerplay before being run out. Pakistan were in the midst of what was turning out to be a collapse. Better sense prevailed. The experienced Shoaib Malik stabilized one end allowing Zaman to bring out his shots. With Malik by his side, Zaman blazed his way to 91 off 46 with the help of 12 fours and three sixes. He fell in the 16th over. Pakistan, riding on his knock, sealed their highest successful chase with four deliveries to spare.

Set with a record chase of 215, Bangladesh top-order set the base for a riveting finish. Openers added 74 runs inside the Powerplay overs. And by the 10th over were back in the dug out. Mushfiqur walked in with his team still needing 115 off 63 deliveries. He kept finding boundaries regularly to keep the required run-rate from exploding out of reach. With Soumya Sarkar he took Bangladesh past the 150-run mark. And then with captain Mahmudullah brought them closer to the target. But the loss of two wickets in the space of five deliveries left their tail exposed. Mushfiqur turned on the style hitting a six when the equation was 16 off 8. Coolly, he shepherded the chase hitting an unbeaten 72 with five fours and four sixes and then celebrated as wildly as he could. It was Bangladesh’s highest ever chase in the format.

It was West Indies’ final match of their tour of subcontinent. They had endured a winless run in India and Bangladesh. The third T20I of a three-match series in Bangladesh was their final chance to return home with a silverware with the scoreline level at 1-1. The momentum wasn’t with them. Lewis himself had endured average outings in the first two matches. He saved his best for the final game blasting 89 off 36 with six fours and eight sixes. With Shai Hope, he led a stunning assault in the Powerplay 88/1 in 6 overs. Special treatment was reserved for Abu Hider who was smoked for four sixes in an over. Hider would later drop Lewis on 49 giving him a reprieve to complete his fifty. He scored his fifty off 18 deliveries the third fastest by a Windies batsman. The lefty was headed towards a century when a slog sweep resulted in an inside edge with the ball crashing on the off stump. Although WI lost their way after his dismissal to be bowled out for 190, Bangladesh fell 51 short of their target giving the tourists a happy sendoff. 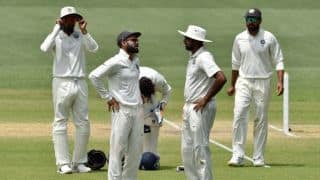