The FIFA World Cup has seen some of the greatest goals scored in football history.

Here are the 10 best goals ever scored in the history of the FIFA World Cup in descending order:

The 1998 FIFA World Cup marked the establishment of Michael Owen as a world class footballer. At the age of 18, Owen became the youngest player and goal scorer for England. It was 1-1 until the 16th minute, when Owen’s strike gave England the lead. However, the match ended 2-2 and England lost 4-3 on penalties. This match is also known for David Beckham‘s red card for a kick on Diego Simeone.

It was the knockout stage of the 1998 World Cup. The match was held at 1-1 until the 89th minute, when Netherlands defender Frank De Boer launched 60-yard diagonal pass towards Bergkamp, who beat Roberto Ayala to score that spectacular goal with the outside of his right boot. That goal in the dying stages of the match put the Dutch team into the Semi-Final, where the Dutch lost 4-2 on penalties against Brazil.

Manuel Francisco dos Santos a.k.a “Garrincha” was one of the greatest Brazilian footballer and is also regarded as the best dribbler in football history. Brazil faced Bulgaria in the group stages of the 1966 World Cup, with Pele and Garrincha the goal-scorers. Garrincha scored the goal from a free-kick, as it was a powerful shot from the outside of his right foot. The ball landed in the top corner of the goal and this free kick was considered as one of the goals of the tournament.

Josimar was not a first choice player for Brazil, as he only managed 16 caps through-out his career. He made three appearances in the 1986 World Cup and scored two goals. Josimar’s goal came off a blistering shot, which doubled the lead for Brazil in that match.

The former Chelsea star had stunned the audience in Cologne’s Rhein Energie Stadium and viewers world wide with the screaming volley goal against Sweden in the 2006 FIFA World Cup group stages. Cole controlled Mattias Jonson’s clearance off his chest and volleyed the ball towards the goal which the Swedish goal-keeper Andreas Isaksson could only help it into the net. This goal is also considered as one of the best goal in England’s football history.

In the Round of 16 stage of the 2006 World Cup, Argentina‘s match against Mexico ended 1-1 after 90 minutes. With the match headed into the extra-time, Maxi Rodriguez’s  wonderful volley in the 8th minute of extra-time ended Mexico’s World Cup aspirations and booked a place for Argentina in the quarter-finals.

4. Esteban Cambiasso vs Serbia and Montenegro in FIFA World Cup 2006

This goal completely justifies football as a ‘team’ game and not individual. It took a series of passes to create this absolutely beautiful team goal. Argentina completed 25 passes before Cambiasso’s icing on the cake. It is regarded as the best team goal ever scored in the World Cup.

The dutch were up against Uruguay in the Semi-finals of the 2010 FIFA World Cup. Giovanni van Bronckhorst, the unlikeliest of goal scorers, launched a thunderbolt strike towards Uruguay goal-keeper Fernando Muslera, breaking the deadlock in the 18th minute of the match. Netherlands won that match 3-2, but lost to Spain in the finals.

Brazil were trailing after Michael Owen’s 23-minute opening goal, but Ronaldinho turned that game around. At first, Ronaldinho assisted Rivaldo’s equalising goal just before the half-time. Then, in the 50th minute, Ronaldinho took a free-kick from 35 metres which completely surprised England’s goalkeeper David Seaman to give Brazil a 2–1 lead. Sadly, Ronaldinho sent-off for a foul on England’s defender Danny Mills.

The 1986 quarter-finals between Argentina and England has seen the best and the worst of football. Following the most controversial moment in football, the ‘Hand Of God’, came ‘The Goal of the Century’ as it is often claimed to be the greatest individual goal of all time. Diego Maradona started his 60-metre rum, which was a 10-second dash towards the English goal, going past four English outfield players – Peter Beardsley, Peter Reid, Terry Butcher (twice) and Terry Fenwick. Maradona finished the move by dribbling round Peter Shilton and put the goal into the net, which made the score 2-0.

(The write is an intern at DNA, where the above article first appeared) 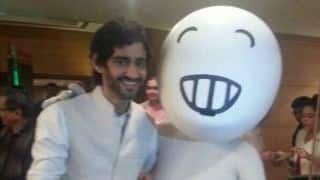