Fernando Santos is confident they can figure out how to beat Ivory Coast in their last group match.

After just a point from two matches, Greece coach Fernando Santos hopes his team can beat Ivory Coast in a Group C match on Tuesday and reach the knockout stage of the FIFA World Cup 2014. If Greece are to have any chance of qualifying for the last-16, they will have to beat the African powerhouse and hope Colombia beat Japan in the other Group C encounter, reports Xinhua.

“We cannot discuss about the past. We have to talk about the future. We have to manage to score goals. Our main aim is to score goals. We can only reach the next stage if we win the match. We have to put all our skills for the victory,” said Santos at a press conference. The seeded team in Group C, Colombia have already clinched a berth in the last 16 after beating Greece 3-0 and defeating Ivory Coast 2-1.

After a 2-1 victory against the Japanese, Ivory Coast are currently ranked second in the group with three points while Greece and Japan both have one point following a scoreless draw between the two sides. “First of all we need to win the match (against Cote D’Ivoire) and then we will see the result of the other match. If Japan win it will be a little complicated. If we win and Japan fail to win then we will reach the last 16,” the coach said. Although acknowledging the quality of their opponents, Santos believes his side will find a way to beat the “Elephants”.

“Cote D’Ivoire is one of the best African teams with very highly talented players playing in the best teams in Europe. They have high quality players. They have experience. But when we came to the World Cup, we knew we are going to face strong opponents”, Santos added.

“We know the ability of Cote D’Ivoire both as a team and at an individual level. We know also the weaker points for their team. So we are ready to counter the strong points and at the same time take advantage of some of their weaker points,” he added. 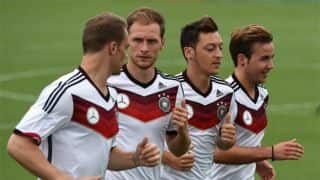