The Argentina captain is campaigning for children who went missing during the dictatorship era.

Argentine football star Lionel Messi, along with other football stars, took part in an advertisement for a campaign aiming to restore the identity of children who went missing during the 1976-1983 era of dictatorship in Argentina.

The ad, which was aired on Thursday, also features Argentines Javier Mascherano, who plays for Barcelona, and Paris Saint-Gremai’s Ezequiel Lavezzi, in addition to Tango Dancers and head coach Alejandro Sabella, reports EFE.

The ad urges those who were born during the dictatorship era, and have doubts about their true identities to go to the office of the “Grandmothers of the Plaza de Mayo,” a human rights organisation which sponsors the campaign, to take DNA test that will prove their lineage.

The program helps those who have lost their identity as a result of the forced disappearance of children that occurred during the dictatorship era in Argentina.

The stars have filmed the ad earlier this month before heading to Brazil to take part in the World Cup, in which Argentina plays in Group F, alongside Iran, Nigeria and Bosnia and Herzegovina. 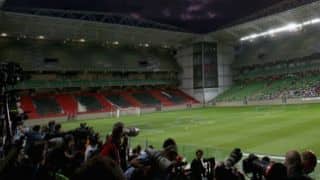