Argentina captain Lionel Messi believes coach Alejandro Sabella has to back his side’s attacking capabilities and include him among a front three when they face Iran in the FIFA World Cup 2014 on June 21 in Belo Horizonte. Napoli striker Gonzalo Higuain is expected to return to Sabella’s starting line-up as the two-time winners look to seal their place in the second round of the FIFA World Cup 2014 with a victory over Iran.

Higuain came on as a substitute to set up Messi to score just his second ever FIFA World Cup goal as Argentina got their campaign off to a winning start against Bosnia and Herzegovina in Rio on Sunday. And Messi said he feels more comfortable playing with both Higuain and Sergio Aguero in attack.

“We are Argentina and I think we need to concentrate on ourselves without fixating on who we are playing,” said the four-time FIFA World Player of the Year. “We feel more comfortable with two up front and me behind because it makes it easier to counter-attack and because we have more people in attack, we have more possibilities.”

Messi eased some of the pressure on his shoulders to finally deliver his best form at a major tournament for his country with his stunning effort in the 2-1 win over Bosnia. However, his underwhelming first-half performance was still criticised by some and he admitted he needs to play closer to the opposition’s goal.

“In the first-half I found it difficult to get a hold of the ball and when I did I was very far from goal. The truth is when I did have the ball I lost it a number of times and at other times I was playing it backwards. I was annoyed at not being able to play the game I had planned.”

Along with Higuain, Fernando Gago could return in midfield at the expense of Maxi Rodriguez as he too made a positive impression as a second-half substitute against Bosnia. Javier Mascherano is also expected to win his 100th cap in midfield and insisted he is as hungry for success as he was on his international debut.

“I am not one of those players that makes the difference on the pitch, but more a player that sacrifices myself for the team. What is my secret? I live for this,” said Mascherano.

Iran made an encouraging start to their campaign too as they held African champions Nigeria to a 0-0 draw in Curitiba on Monday. Coach Carlos Queiroz fiercely defended his side’s tactics in that match given their lack of facilities and poor preparation in comparison to their more illustrious opponents in Group F.

And striker Reza Ghoochannejhad believes his side can enjoy the experience of taking on one of the best side’s in the world with nothing expected of them.

“We have to enjoy it and follow the coach’s instructions to the letter. We’ve got absolutely nothing to lose in this match,” said the Carlton Athletic striker.

“Argentina are among the favourites this year, while the same can’t be said for us. All the pressure will be on their shoulders and we will have to show our resilience, like against Nigeria.” 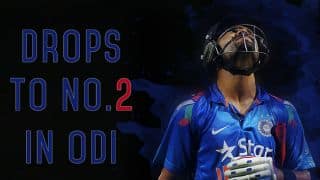