Both Nigeria and Iran were involved in the first stalemate of the FIFA World Cup 2014.

African champion Nigeria were held to a 0-0 by Iran in a FIFA World Cup 2014 Group F match at the Arena da Baixada in Curitiba on Monday, for the first draw in this year’s tournament. The two teams split opportunities in the match. Nigeria had more chances in the first half, while Iran did a better job in the second.

Though the temperature of 21 degrees celsius was perfect for football, it wasn’t a match of high quality attacking play that is been emblematic of this year’s World Cup, reports Xinhua. Iran became the first team from Asian Football Confederation to win a point at the tournament.

Iran were the highest-ranked Asian team in the most recent FIFA Rankings. Nigeria were also one of the best teams in Africa. “I remember watching the World Cup in South Africa. It was disappointing that we didn’t come out of the group in 2010,” said the 21-year-old defender Kenneth Omeruo, who plays for Chelsea.

Nigeria took an early advantage. Victor Moses cut inside from the Nigerian left and hit a pop shot from the edge of the box, but the shot was too comfortable for Iran goalkeeper Alireza Haghighi. Nigeria had several good attempts afterwards, and even sent one ball into the goal, but the referee decided John Obi Mikel had committed a foul against the Iran goalkeeper before the shot.

Defender Godfrey Oboabona went up for a header in the 21st minute. He didn’t land well and was carried out of the pitch for treatment. Haghighi was challenged again in the 32nd minute by a freekick from Nigerian midfielder John Obi Mikel, and he was quick enough to keep the shot away from the goal.

Iran had a chance in the 34th minute, but Vincent Enyeama, in the Nigerian goal, brilliantly saved the strong header. Nigeria continued the dominance in the second half, but Iran defenders stood strong. The Iran attackers also benefited from the strong defence. Both Haji Safi and Reza had opportunities to give Iran the lead, and the threat got bigger and bigger for the African champion.

There was another chance in the 71st minute for Nigeria. Shola Ameobi tried to get on the edge of a deep cross into the box, but he impeded the Iranian defender and the effort wouldn’t have counted anyway. Both sides made great effort in attacking in the rest of the match, but neither managed to score. 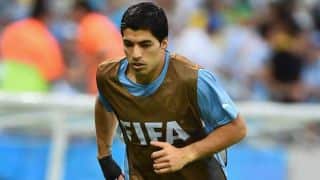